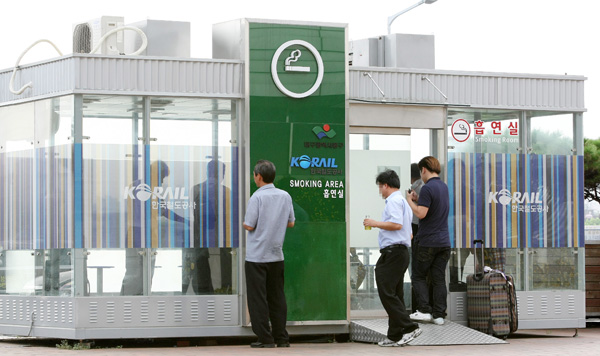 Smokers enter a smoking room that was built illegally without a permit in the plaza outside Dongdaegu Station in Daegu. By Gong Jeong-sik

A total of 663 people were busted smoking in non-smoking buildings during a joint three-week crackdown conducted by the Health Ministry and local governments across the nation in July, the ministry has said. But questions are rising as to whether new smoking bans are really being properly enforced with so few people being caught and new smoking rooms being built without permits.

In December last year, a law went into effect forbidding smoking inside public buildings including restaurants, bars and other entertainment-based facilities larger than 150 square meters (1,615 square feet). Individual violators are subject to a fine of 100,000 won ($92). The shops and building owners can get hit with a maximum fine of 5 million won for letting people light up.

All facilities must provide a separate smoking section that is sealed and has a discreet ventilation system so the smoky air doesn’t affect the other customers. Facilities without such a room need to put up a no-smoking sign.

A six-month grace period ended in June, and the Health and Welfare Ministry and local administrations around the country launched the crackdown from July 1 to July 19. Some 2,700 government officials were mobilized for the operation.

The ministry said on Tuesday that a total of 64.5 million won in fines were imposed on the 663 violators during the period.

It added that they directed 3,238 businesses without no-smoking signs to put them up. Ten businesses were caught not following signage or separate smoking room regulations, resulting in a total of 16.1 million won in fines levied on those 10 business owners.

Still, there are serious doubts about how well the new policy is being enforced. The ministry went out of its way to inform the public about the crackdown before they started it. And despite the thousands of government officials sent out to find illegal smokers, under 700 people were caught across the whole country over the course of three weeks.

“Some officials visited bars and PC rooms and didn’t impose any penalties despite violations,” the owner of an Internet game room surnamed Choi told the JoongAng Ilbo.

“They looked like they didn’t want to come into conflict with the merchants.”

“We have seen some side effects due to the policy because people who used to smoke inside restaurants and PC rooms now come out and smoke on crowded streets, where many pedestrians are passing by,” the ministry said in a press release. “We will keep informed about the policy to reduce such side effects.”

As the government has been promoting the smoking ban, about 100 separate smoking rooms have been built outside of public buildings such as Mapo District Office in western Seoul; Central City, a shopping mall in Seoul’s Seocho District; ChungAng University; and Dongdaegu Station in Daegu.

The smoking rooms are around 10 square meters, have a closed roof and a ventilation fan and can fit about 10 adults at a time. However, most have been built illegally, without government building permits.

According to the Ministry of Land, Infrastructure and Transport, every smoking room built as a separate structure needs a permit and must be inspected by the local government when completed.

But the extra administrative headaches mean that local governments just aren’t bothering with permits. In fact, not one has established regulations on building smoking rooms and such facilities are generally excluded from fire and safety inspections.

“I built a total of 10 smoking rooms from January to May, but none of them had building permits from the local government,” said a 40-year-old private builder surnamed Lee.

The smoking room for Dongdaegu Station was built in the station square in April. The Korea Smoking Association and Korail put up 65 million won to build the room.

“That smoking room is an unauthorized facility that should be dismantled,” a city official told the JoongAng Ilbo. “The government should provide regulations that can give guidelines for building a smoking room.”