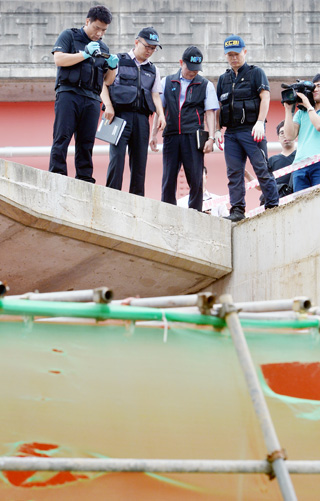 Investigators from the National Forensic Service and the Seoul Metropolitan Police Agency’s science investigation team conduct an inspection at the site of the accident at Banghwa Bridge yesterday. [NEWSIS]

After a series of fatal accidents on construction sites, safety supervision by the Seoul city government on its building projects is under fire.

On Tuesday, a 47-meter (51.4-yard), 320-ton steel ramp being built to connect the Banghwa Bridge and Banghwa-dong, western Seoul, fell from a 10-meter supporting pillar, killing two workers and injuring one.

All three workers were on the ramp when it slid off the pillar and onto the construction site beside the bridge. The city government believes the ramp tipped on its side and plummeted to the ground.

Seven daily-wage workers were swept away on July 15 while replacing water pipes between Hangang Park and Nodeul Station of subway line No. 9 that distribute water to nearby apartment complexes.

Water from the Han, swollen due to heavy rainfall and discharges from the Paldang Dam, poured into the construction site, according to the city government.

After the Noryangjin accident, the city government conducted safety inspections on construction sites in which the total investment for each job was 3 billion won ($2.7 million) or higher. The bridge was one of the sites inspected. 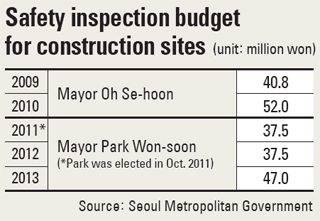 “A total of 30 officials from the civil construction department checked about 90 ongoing construction sites in the city from July 22 to 24, but they just inspected them by naked eye due to a shortage of manpower,” a spokesman of the city government told the JoongAng Ilbo.

“For the bridge, our officials checked if there were any kind of cracks on any structures on the 2-kilometer (1.24-mile) site.”

Doubts are being raised over whether the city government supervises construction and inspection companies with any thoroughness.

According to Construction Technology Management regulations, the organization that orders a project, such as the city government, can award penalty points to builders and inspection companies found neglecting safety. Companies receiving penalties can be banned from bidding on any projects by the city government for years.

According to a document obtained from the Ministry of Land, Infrastructure and Transport, the city government has given no penalty points to any private construction or inspection companies from last year to June of this year, including the companies working on the Noryangjin and Banghwa Bridge sites.

But Kunhwa, the inspection company for the Noryangjin project, and Sambo Engineering, the inspector for the Banghwa Bridge project, did receive penalty points from other local governments.

Kunhwa received demerits from the Hwaseong city government in Gyeonggi, the Hamyang County Office in southern Gyeongsang, and from the Korea Rail Network Authority last year for neglecting their duties to maintain safety on the job.

Sambo Engineering received penalty points from the Iksan land management office under the Land Ministry in North Jeolla this year. The construction company on a project didn’t follow the agreed design, which Sambo failed to catch.

To prevent future accidents, the Seoul government said yesterday it will conduct special inspections on 49 large construction sites including the World Cup Bridge in western Seoul.

The inspection will be conducted by 41 safety experts and civil servants until Aug. 7. The government said it will order work stopped if any safety problems are found.

“After the Noryangjin accident occurred, some large construction sites including Banghwa were inspected but we decided to expand the inspection this time,” said Cho Sung-il, director of the urban infrastructure department of the city government during a press briefing held yesterday.