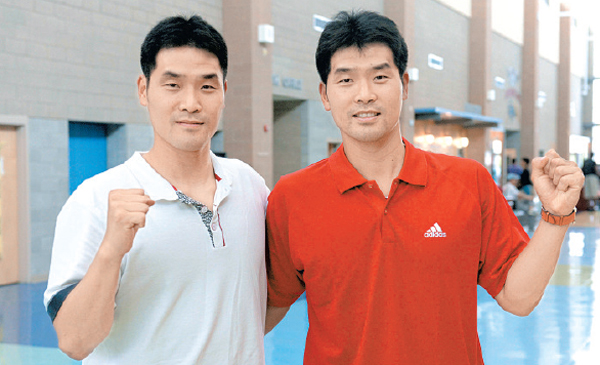 Cho Dong-hyun, left, and Cho Sang-hyun once were among the best players in the Korean Basketball League. Now, they have become coaches. [NEWSIS]

The lives of twin brothers Cho Dong-hyun and Cho Sang-hyun are as identical as their appearances. They once were among the best players in the Korean Basketball League. Now, they’ve both embarked on coaching careers.

Sang-hyun, 37, who was born first, retired from the Goyang Orions in April and Dong-hyun bid farewell to the KT Busan Sonicboom a month later. Sang-hyun stayed with the Orions as an assistant coach, while Dong-hyun left for the 2012-13 season champion Ulsan Mobis Phoebus.

They started playing basketball at Seodaejeon Elementary School in Daejeon and continued through Daejeon Middle School, Daejeon High School and then Yonsei University in Seoul, where they were admitted before the 1995 academic year.

The brothers said they rarely consult with each other regarding their careers. In fact, they rarely talk to each other. However, they met last week in Las Vegas, where they were recruiting foreign players during a tryout for the Korean Basketball League’s 2014 season. It was the first time they have met since their retirement, they said.

Here are excerpts from an Ilgan Sports interview with the Cho brothers while they were in Las Vegas.

A.Sang-hyun: “It was not intentional. I thought my brother would continue his career as a player, but he suddenly declared his retirement. In fact, I learned about his retirement after reading news articles on the Internet.”

Have you two ever felt pressured, as people often compare you? Sang-hyun: “To me, my brother is not a rival, but a fellow basketball player. But I found us becoming the subject of comparisons and that was stressful sometimes.”

Dong-hyun: “I think he might have felt pressured more than I did. People don’t take issue when a younger brother loses to the elder brother, but not vice versa. For me, he was not an opponent that I had to beat, but only one of the players that I needed to defend against.”

How often do you stay in touch?

Sang-hyun: “Once a season starts, I didn’t call him once. I am not the kind of person who gets anything off my chest to anyone, not even my family. After the season was over, we had drinking sessions together from time to time, but didn’t talk with each other often. In that regard, Lee Seung-jun and Lee Dong-jun are more like twin brothers (although they are not twins). (Seung-jun, 35, of the Wonju Dongbu Promy, and Dong-jun, 33, of the Seoul Samsung Thunders, are Korean-Americans.) I heard that they are even visiting each other’s team for a family get-together (laughs).”

Dong-hyun: “I talked with my brother often because we were roommates at college, but since we started our professional careers, we have not had enough time to contact each other because of conflicting schedules. But, old friends know each other well without words.”

You both pursued sports careers. Do you think it is a gain or loss?

Sang-hyun: “Sometimes, I felt discomfort when the fact that we are twins became an issue, but also because of that we were beloved by fans more than we would have been. We could also make a lot of money thanks to that. I would say there was more gain than loss.”

Dong-hyun: “I felt sick often when I was a child, but I wanted to keep up with him and kept playing basketball. If he had not played basketball, I would have given up on it early.”

Both of you decided to retire suddenly. Why?

Dong-hyun: “I was lucky to be able to become a coach. It was a coincidence. I saw some of the senior players who played better than me have difficulty securing a coaching job, and I could get a good opportunity.”

Sang-hyun: “I had not considered retiring seriously, as well. I was given an offer to become a coach during the last season. I was at a loss because it was so sudden. I actually was thinking that if I was going to retire that I would go overseas to study.”

Have your coaching careers met your expectations?

Sang-hyun: “(Orions) Head coach Choo Il-seung is doing research a lot beyond my imagination. He is often awake during the wee hours. That keeps me from sleeping more than four or five hours a day. I am also studying English, beginning with memorizing new English words. Still, I am happy that I am able to have many new experiences.”

Dong-hyun: “It is not the team that I played with and retired from, and it makes me nervous to keep in tune with new players. I have had an acquaintance with (Phoebus) head coach Yoo Jae-hak, but it was unexpected to meet him as a fellow coach. When I was a senior player, it was an easy life, but now as a coach, I have to take care of the players.”