Animation festival for everyone

Animation festival for everyone 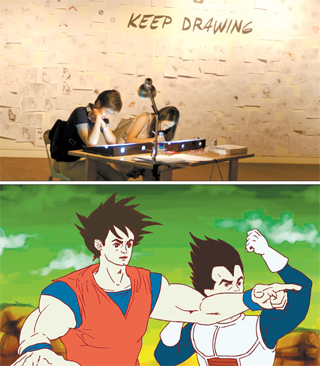 Top: The “Keep Drawing Project” invites anyone to contribute to a film. Bottom: “Dragonball V” is also screening. Provided by the festival

The fourth annual 10 Seconds International Animation Festival kicked off Wednesday and, as it has always done, it will screen every work submitted to the festival - 152 this year - as long as it is at least 10 seconds long.

Visitors to the festival at Insa Art Center in Insa-dong, central Seoul, can catch a wide array of films made by dedicated amateurs, running until Monday.

But for those who want to see how the pros do it, there are six films by professional animators, including Matthieu Van Eeckhout, Eoin Duffy and Korea’s Yoon Ji-yeon, to be screened.

The 152 films come from 131 people, and they are so diverse that they truly defy categorization. Organizers said that they want viewers to “just enjoy” the films without worrying about genres and details.

You can catch them all day long, as the films are playing on a loop at Insa Art Center, or you can see them all online at the festival’s Web site (www.10secfest.com).

The festival believes that art should be taken as it is, without the criteria, divisions or judgment that often accompany film festivals that focus on top directors and A-listers only.

In addition to free screenings, the highlight of the six-day event is the D.I.Y Awards, which hands out prizes to the entries most enjoyed by the viewers. But there is a catch: the winner doesn’t actually win anything.

There is also an exhibition where works of artists such as Hahn Ai-kyu, Bae Byung-woo and Sa Suk-won have been re-interpreted by animators, under the label “Animation Invasion.”

Although the festival has already started, it is not too late to submit your own project. At Insa Art Center, visitors are able to contribute a picture to the “Keep Drawing Project.” Each and every artwork will be filmed and shown as the closing film.

After 2011, the festival gained a second showing in Paris, and this year, the screening in France will take place in October.

Calling itself “the most democratic film festival,” the 10 Seconds Festival is open from 10.30 a.m. to 7 p.m. On Saturday night there is also a party open for all attendees at the W Stage, on the fourth floor of the Anguk Building in Insa-dong.