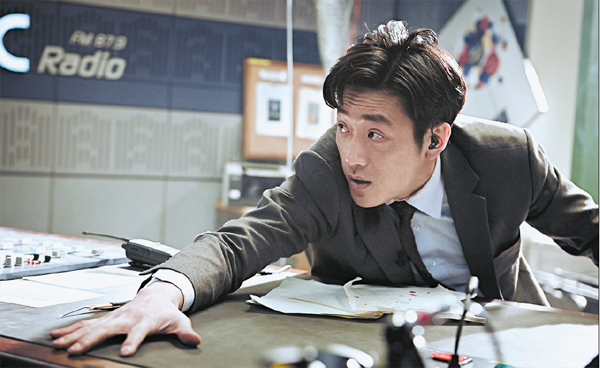 Ha Jung-woo plays a radio newsman squaring off against a terrorist in “The Terror Live.” Provided by Lotte Entertainment

Ha Jung-woo is back. One of Korea’s hottest leading men, having made his name on such hits as “The Chaser,” “Nameless Gangster” and “The Berlin File,” Ha is front-and-center in “The Terror Live,” playing a radio host who finds himself sucked into a deadly terrorist attack in Seoul.

In theaters now, “The Terror Live” is an usual thriller - it is set almost solely inside of a radio studio and focuses heavily on Ha’s character, Yoon Yeong-hwa, a radio host recently demoted from his position as a TV anchor. Fortunately, this movie is more than just a thrill ride, it has something to say.

The film starts off with a bang, as radio host Yoon receives a peculiar call from a stranger threatening to blow up Mapo Bridge. Self-absorbed Yoon couldn’t care less, and calls the stranger’s bluff - unfortunately, the voice on the phone isn’t bluffing, and within seconds a nightmare scenario unfolds.

Ever the opportunist, Yoon sees a chance to reclaim his TV job. He uses the terror attack to get back on the air, setting up a makeshift television studio from his radio station, and soon the whole nation is watching him.

Lucky for Yoon, the terrorist wants to keep on talking. He demands the president of Korea in exchange for the safety of the hostages still stuck on the bridge.

As the story unfolds, the full scope of the terrorist’s plans begins to unfold, steadily ramping up the tension with surprises and reversals.

Throw in a studio bigwig who is out to boost ratings, a police agent who is trying to locate the killer and Yoon’s selfish personal agenda, and there is never a dull moment.

The terrorist bombings are cleverly done, and there are enough exploding fireballs at just the right intervals to keep hearts racing. With each unexpected turn, the viewer gets pulled deeper into the story, swept away by the film’s energy, regardless of logic or more sensible concerns.

Ha is known for bringing humor even to serious roles, but that lightness is used sparingly here. Yoon is an arrogant yuppie, and Ha plays him to entertaining extremes.

Only when Yoon’s former lover becomes entangled in the story does he get shaken out of his narcissism, instantly humanized when the bigger-than-life story suddenly becomes about his life.

With the story so focused on Yoon, there was potential for monotony, but there is something so comical and yet pitiful about Yoon’s situation and the way his selfish human nature manifests itself, it really hooks you.

Ha’s acting range is really put to the test, but even without - or perhaps because of - other characters and settings, Ha’s emotional gravity is astounding. Be prepared for an emotional roller coaster with several sharp turns.

Thanks to Ha’s charisma, “Terror Live” has enough energy to carry viewers along to the end.

More than just a thriller, through the desperate acts committed by the anonymous caller, the film examines the hierarchical structure of Korean society, with an emphasis on the plight of blue-collar Koreans caught up in a fast-evolving capitalistic economy.

The conversations between Yoon, a white-collared snob, and the terrorist, who identifies himself as a construction worker, are intense and engaging.

The unseen killer is emotional and convincing, and the government’s response to the threat will seem more than a little familiar to real-life problems.

Director Kim Byung-woo is a relative newcomer, having made only one feature before, the independent but highly regarded “Written.” Kim’s style is minimal with plenty of handheld cameras, but it is mostly effective for this story.