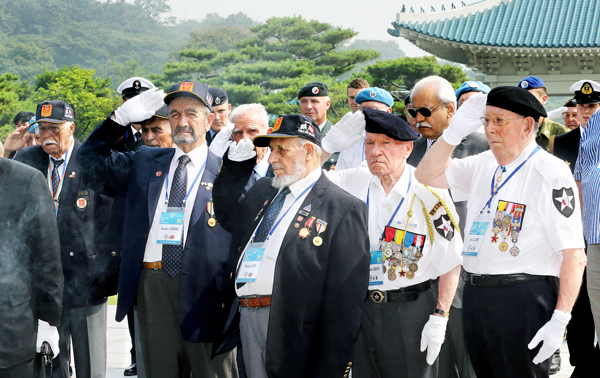 Whenever we commemorate the Korean War, the Korean media publish stories about how an alarming number of schoolchildren are ignorant about it. This year, the Chosun Ilbo reported: “More than half of South Korea’s teenagers do not know when the 1950-53 Korean War started.”

Normally I would just shake my head and go on with my day. But this year, I paused and asked myself: “What exactly do I know about the Korean War?”

Not much, it turns out. It’s not a topic we talk about much even in my family. My grandfather would occasionally tell me stories, but he never went into great detail. That is why I more than welcomed the chance to spend two days with a group of American veterans.

Arden Rowley was a combat engineer involved in the northward push from the Pusan Perimeter. He fought all the way to the war’s northernmost frontline and, when the Chinese entered the war, he helped cover the United Nations forces retreat. Many in this rearguard action were overrun by enemy forces and taken prisoner. In total, nearly 5,000 UN soldiers were taken prisoner.

“We were getting just a bowl of either cracked corn or millet … There was hardly any nutrition and dysentery took its toll, as well. About 250 to 300 men died in about two and a half weeks,” he says.

Although he has largely come to grips with his time as a POW, he remains angry about how the communists treated their prisoners. “The International Red Cross … offered to send food and medicine to both sides. The communists steadfastly refused to let them. A little bit of food, a little bit of medicine could have saved thousands of lives. And if I have any grudge against the communists, it’s that one fact. That they were so pigheaded … rather than lose face they let a lot of men die,” he says.

Frank English was a Marine who fought in the hills near Panmunjom during the last year of the war. By that time, lines had largely settled on what is now the border between the two Koreas and both sides fought furiously to try to gain just a little more ground.

“It was trench warfare. Close quarters. Hand to hand,” English explains. “The Chinese would advance behind a rolling artillery barrage so close they were hitting their own guys with shrapnel. We learned to wait until the shelling stopped and then we’d peek our heads up and there they were. Right in front of us.”

It was an experience that has stayed with him, although he didn’t know how much it affected him until decades later after he had retired and began experiencing nightmares. He eventually sought help at the urging of his wife.

Nearly 400,000 soldiers came to Korea as part of the UN coalition force and almost 60,000 of them were killed in action. More bombs and artillery shells were used on the Korean peninsula than in all of World War II. Yet somehow, many people don’t seem to realize a war was fought here. James Snuffer, a soft-spoken former Marine who landed at Incheon and fought at Chosin Reservoir, tells me emphatically: “People don’t know what we did here.”

Every veteran I spoke to repeatedly pointed out that the Korean War is known as the “Forgotten War” in the United States. It didn’t end in a great victory like in World War II, nor was it a catalyst for social upheaval like the Vietnam War. In fact, it slipped from the American consciousness even as it was being fought. “I never told anyone I was a Korean War vet,” Frank English says. “Nobody seemed to care.”

But I care. And so should every South Korean alive today.

Had the UN not voted to intervene, the Pusan Perimeter would surely have collapsed and the North would have won. And where would we be if that had happened? Very likely an utterly corrupt international pariah depending on weapons smuggling and drug trafficking to barely survive. Just take a look up north to see what could have been.

Coming to realize the gravity of what these men and others like them did in a country few had ever heard of, I tried to show my appreciation in the only way I could - by grasping the hands of every veteran I spoke to and saying with utter sincerity, “Thank you for everything.”

Now that we’ve commemorated the 60th anniversary of the armistice, coverage in the media will fade away and the issue will migrate to the backs of people’s minds. And there will soon be a day when we won’t be able to hear firsthand accounts. As Lewis Ewing, National Director of the Korean War Veterans Association, points out, “There are fewer and fewer veterans every year.”

It might be a forgotten war in the U.S., but not in Korea. We owe these men, and every other soldier who fought for this country’s freedom, too much. Honoring their sacrifices and not letting them be forgotten is the least we should do.

* The author is a contributing writer to the Korea JoongAng Daily, based in Hong Kong.