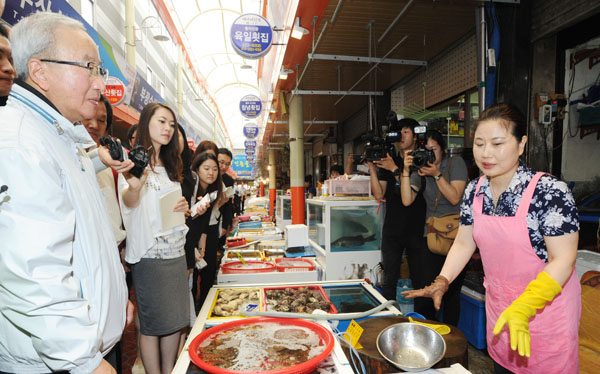 Finance Minister Hyun Oh-seok chats with a merchant yesterday at Masan Fish Market in Masan, South Gyeongsang, during his two-day field trip. Provided by the ministry

CHANGWON - Despite the government’s brighter outlook for exports in the second half of the year, the country’s small exporters grumble about insufficient support.

On the second day of his field trip, Finance Minister Hyun Oh-seok met with 17 small exporters at Gyeongnam Techno Park in Changwon, South Gyeongsang, to listen to their difficulties amid continuing uncertainties in overseas markets. Changwon is home to exporters and manufacturers that accounted for 52 percent of the country’s $28.6 billion trade surplus last year. Gyeongnam Techno Park, established in 2004, is a hub for new-growth industries like aerospace, shipbuilding and cutting-edge parts and materials with 226 small businesses operating there.

Lee Ki-beom, CEO of One Point, a small plastics producer, called for government solutions to his company’s increasing financial burdens stemming from the low yen.

“We think an adequate level for the won-yen rate is 1,050 won, but the yen is depreciating further,” Lee said. “Considering a raise in the minimum wage next year and the weakening yen together, we are facing a significant amount of losses.”

The minister agreed with the exporter, saying, “The Korean won’s value has declined, but the Japanese yen has depreciated even more, adding burdens to our exporters.”

It has also lowered insurance premiums for small exporters by 20 percent through the end of the year.

Hyun pledged to the exporters that the government will offer more financial support for their losses. About 11 trillion won is planned to be allocated for trade finance this year, according to the minister.

Kim Jin-seop, CEO of Jinyoung TBx, an exporter of machine parts, made an appeal that small businesses are suffering language difficulties.

“We have to read hundreds of documents written in English or other languages to sell our products abroad,” Kim said. “It costs us 20 million to 30 million won to use high-quality translation services, but the government provides only 1.5 million won.”

“Even if our buyers want to buy more, we can’t supply it because we don’t have enough workers,” said Kim Man-sik, owner of Monggo Food. “Young people avoid small businesses, even if they are seeking jobs.”

Hyun forecasts that conditions for local exporters will improve in the second half of the year as government policies begin to take effect and external uncertainties ease.

“Exports couldn’t grow in the first half, but we expect a 5 percent increase in the second half, considering the U.S. economic recovery and the government’s policy support,” the minister said.

According to the Ministry of Trade, Industry and Energy yesterday, exports rose 2.6 percent year-on-year to $45.8 billion in July, indicating a possible recovery. Despite ongoing difficulties including the low yen and U.S. sanctions on Iran, exports to China and the U.S. continue to grow, the ministry said.

“As ship exports to the European market have been recovering for the past two months, the outlook for the coming months is bright,” the ministry said in a report.

The finance minister wrapped up his trip yesterday by visiting Posco’s steel mill in Gwangyang, South Jeolla, a fish market in Masan, South Gyeongsang, and an industrial complex in Ulsan.

“Answers are in the fields, and policies stem from the fields,” Hyun emphasized.