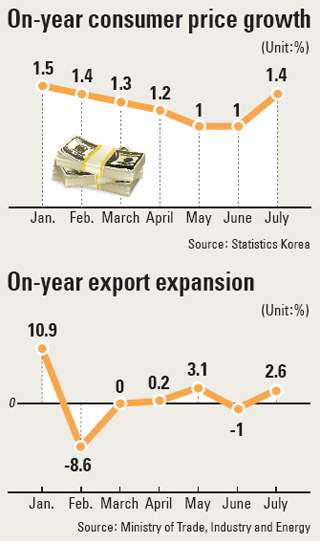 Concern over deflation seems to have subsided after inflation increased in July.

The report came a week after it was announced that the nation’s economy in the April-June period recorded its highest quarterly growth in two years.

It was the sharpest increase in consumer prices since they grew at the same rate in February.

Pork prices rose 7.8 percent thanks to the start of summer vacation with many families firing up their grills.

The price of manufactured goods expanded 1.4 percent year-on-year as international crude prices have been going up recently largely due to instability in the Middle East, including Egypt.

Earlier this year there was concern that the economy might be heading into deflation as inflation growth had been falling since January.

In May and June, consumer prices nudged up 1 percent.

As a means of supporting the economy, the central bank further lowered the key borrowing rate to 2.5 percent in May and consumer prices failed to gain momentum as consumers worried about the stagnant economic situation and reined in their spending.

This was happening while the economy was posting a sub 1 percent quarterly expansion since 2011.

The central bank, in a report released earlier this week, projected that consumer prices would rise 2.1 percent in the second half of the year, compared with the 1.3 percent growth recorded in the first six months.

The central bank said prices of agricultural goods, which have remained low, will likely shoot up due to seasonal conditions such as bad weather, while prices for manufactured goods will rise compared with the first half as the economy improves.

It also projected that higher costs for gas will likely raise the overall consumer prices.

Although July’s inflation rate turned around from a continuing decline for the first time since January, it is getting doubtful whether consumer prices can increase 2 percent in the second half.

Consumer prices have been growing below 2 percent since November 2012.

Meanwhile, exports in July grew 2.6 percent to $45.8 billion. This is a turnaround from a 1 percent decline recorded in June. Growth was fueled by stronger year-on-year performances in all three of Korea’s leading exports markets.

Exports to the EU, in particular, have shown the most stable growth with shipments to the region in June increasing 13 percent.

On the other hand, exports to Japan and Southeast Asia have decreased.

Byproducts, exports of mobile communication goods continued to see the largest growth at 27.3 percent followed by semiconductors at 21.8 percent.

Shipbuilding continued to grow for the second consecutive month as it gained 19 percent in July.

Exports of automobiles, textiles, steel and computers all declined. Automobiles, one of Korea’s key exports since the 2008 global crisis, shrank 3.3 percent.

“The 2 percent growth in exports in July, along with posting the largest trade surplus in the first half despite the overall sluggishness in the global market, is a good sign for exports in the second half,” said a trade ministry official.

The nation has enjoyed a trade surplus for 18 consecutive months.