In the United States, tough times for beef lovers

In the United States, tough times for beef lovers 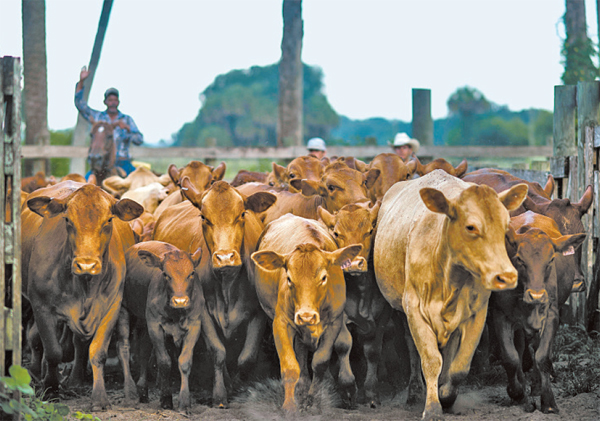 Production in the U.S. will decline 4.9 percent to 10.93 million metric tons (12.05 million short tons) in 2014, retreating for a fourth year, the government says. The herd on July 1 was the smallest for that date since at least 1973, according to the average of four analyst estimates. The most active cattle futures will reach $1.33 a pound next year, a level last seen in February, the median of nine forecasts shows.

Ranchers still haven’t recovered from last year’s drought that sent grain costs to a record and spurred them to slaughter more cattle. While feed costs are now slumping as U.S. farms prepare to reap the biggest corn crop ever, it takes more than two years to raise enough animals to expand supply. Retail ground-beef prices in June were up 13 percent from a year earlier and near a record set in January.

“The drought has really affected the cow herd,” said Tucker Hughes, a 65-year-old rancher in Stanford, Montana, who predicted the number of animals he retains for breeding may drop as much as 20 percent over the next two years. “Some people had to downsize their herds. When you get these droughts, you have to reduce your numbers.”

Traders anticipate that this year’s 5.2 percent drop in futures to $1.25475 a pound on the Chicago Mercantile Exchange will reverse. Their prediction for a 6 percent gain would take prices close to the record of $1.35175 reached Jan. 11. Futures averaged about $1.249 since the start of January, heading for the highest-ever annual level.

McDonald’s, the world’s largest restaurant chain, probably will pay 2.5 percent to 3.5 percent more for beef this year, according to Jack Russo, a St. Louis-based analyst at Edward Jones. That’s more than the forecast 1.5 percent to 2.5 percent increase in total commodity costs that Chief Financial Officer Peter Bensen predicted on a July 22 conference call.

While the Oak Brook, Illinois-based company will consider charging more for food, competition and price-sensitive consumers mean “we have less pricing power in 2013 versus a year ago,” Bensen said.

Wholesale beef prices dropped 12 percent since reaching a record $2.1137 a pound on May 23, as the acceleration in slaughtering boosted supply, government data show. Prices probably will exceed that peak next year, said Ron Plain, a livestock economist at the University of Missouri in Columbia.

Global meat prices rose 2.1 percent in June, the most in nine months, while the overall cost of food dropped 0.9 percent to the lowest since February, United Nations data show.

Retail ground beef averaged $3.382 a pound in June, the second-most ever behind the record of $3.407 in January, Bureau of Labor Statistics data show. Prices will top the record next year, said Steve Meyer, president of Paragon Economics in Adel, Iowa. The government estimates consumers will pay as much as 3.5 percent more for beef in 2014.

Beef costs for Ruth’s Hospitality Group, the Heathrow, Florida-based steakhouse owner, climbed 17 percent over two years, Chief Financial Officer Arne Haak said during a presentation on June 25. The restaurant raised prices in February. Next year and 2015 will still be tough because of the lack of supply, Chief Executive Officer Michael O’Donnell said June 18.

Higher prices are curbing demand, with U.S. beef shipments tracked by the government down 2 percent this year through May. The dollar’s rally to a three-year high in July also is eroding the appeal of U.S. exports and China and Russia are restricting meat with ractopamine, a feed additive some U.S. producers use to increase lean muscle.

Cheaper feed and easing drought conditions in most places may encourage ranchers to expand. Corn futures on the Chicago Board of Trade are now 44 percent lower than the record reached in August.

“An expansion would initially be bullish for prices because cows would be retained for breeding rather than slaughtered, said Chris Hurt, a professor of agricultural economics at Purdue University in West Lafayette, Indiana.

It takes about 30 months to boost beef production, according to CattleFax, an industry researcher in Centennial, Colorado. Calves have a nine-month gestation and take about 20 months to reach slaughter weight.

Cattle in the United States are raised from birth on pastures for about a year, when they weigh 500 pounds to 800 pounds, and then are sold to feedlots. The animals then consume mostly corn until they are 1,200 pounds to 1,350 pounds and are sold to slaughtering plants.