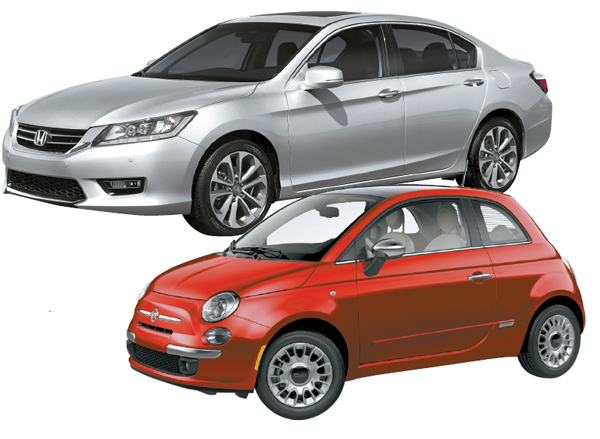 Honda’s Accord, top, and Fiat’s Cinquecento are two foreign models with summer discounts. Provided by the companies

The price war between foreign brands and local automakers is getting fierce as various promotions continue to catch consumers’ attention.

Chrysler Korea said yesterday it will continue its promotion for Fiat models this month. Celebrating the 56th anniversary of its popular city car Cinquecento (500), the company will continue last month’s discounts through August.

“We saw the number of visitors to our dealers and car sales double in July compared to June,” said Chung Il-young, Chrysler Korea’s marketing director for Fiat. “Since the reaction from our customers was so hot, we decided to keep the promotion as a way to thank them.”

The Freemont SUV is going for 44.9 million won, a discount of 5 million won.

In addition, Chrysler Korea is offering a 7 million won discount on its 300C 3.6-liter model.

Honda Korea also said it is having a “Vacation Bonus Event” in August, offering buyers a cash back “vacation allowance.”

In addition, Honda Korea will give 3.5 million won cash back on the Civic compact hatchback. The company last month offered a 3 million won discount on the model.

Local automakers also have been trying to counter with their own promotions, although the discounts were not as large as those for foreign brands.

However, they saw bit of fruit in July sales and industry observers said that automakers’ price promotions have paid off.

Domestic sales of the five Korean automakers last month were 124,963 units, up 2.9 percent from a year ago. It was also highest monthly sales figure so far this year.

Among the five, Hyundai Motor was the only one that saw its domestic sales decrease from a year ago.

SsangYong Motor, which was the only Korean automaker to post domestic sales growth in first half, continued its rally with 20 percent growth. Renault Samsung Motors also marked 1.7 percent on-year growth in July after selling 5,089 units.

To keep up the momentum, Korean automakers will contine discount promotions for the remainder of the summer. While Hyundai and Kia are poised to offer discounts on old models and hybrids of 100,000 won to 1.5 million won, GM Korea is offering cash back “vacation allowances.”

SsangYong and Renault Samsung are luring customers with low interest rates and various gifts that are useful during vacations, such as camping equipment.