Aso backs away from Nazi remark

Aso backs away from Nazi remark 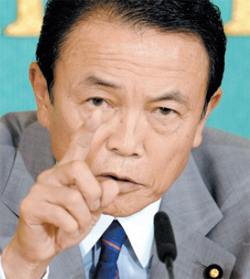 Japanese Deputy Prime Minister Taro Aso yesterday recanted his controversial remarks that Tokyo, as it tries to reform its pacifist constitution, should follow the example of secret changes the Nazis made in Germany.

On Monday, Aso said in a lecture at a Tokyo think tank that Japan can study how Germany’s Weimar Constitution was changed by Adolf Hitler’s Nazi regime in 1933 “without being noticed.” He said, “Why don’t we learn from their tactics?”

Taro told reporters in Tokyo yesterday that he regretted the “misunderstanding” incurred by his words, which differed from his “true intentions.”

He said, “I used the Nazi regime example as a negative case where change occurred without adequate understanding from the people or discussion, with the purpose of emphasizing that constitutional reform needs to be discussed in a stable environment.”

Chief Cabinet Secretary Yoshihide Suga, Abe’s top spokesman, said at press briefing yesterday that the “Abe cabinet will never view the Nazi government positively.” He had made no comment on the uproar Wednesday.

Opposition parties called for Aso, who also serves as the finance minister under the right-wing Shinzo Abe administration, to resign. They said simply retracting the remark was insufficient.

It is rare for the outspoken deputy prime minister to recant remarks.

Aso also said on Monday that he supports “quiet” visits to the Yasukuni Shrine in Tokyo, which houses Japan’s war dead including war criminals. Such visits enrage Seoul and other victims of Japanese imperialist rule.

The international community, Jewish organizations, Seoul and Beijing all expressed concern at the Nazi remarks.

The Simon Wiesenthal Center, a U.S.-based Jewish rights group, issued a statement saying, “The only lessons on governance that the world should draw from the Nazi Third Reich is how those in positions of power should not behave.”

The spokespeople for the Korean and Chinese foreign ministries, Cho Tai-young and Hong Lei, both expressed disappointment. Hong reminded Japan to “reflect on its history.”

“I heard that the person in question retracted his remarks,” Cho said yesterday, adding he hopes that “Japanese government and leaders will be more careful with their remarks in the future.”