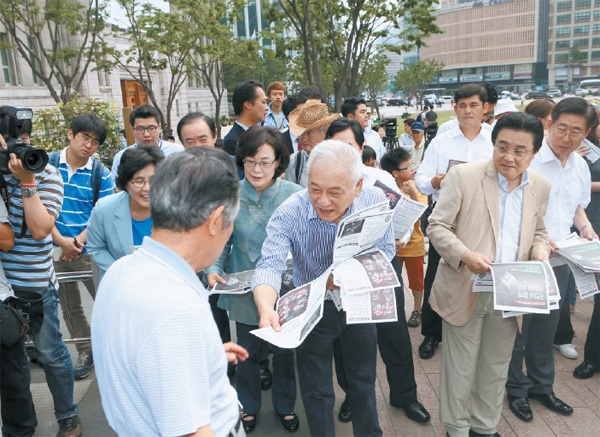 Kim Han-gill, chairman of the Democratic Party, hands out fliers to passersby in Seoul Plaza yesterday to protest the ruling party and government’s attitude toward the National Intelligence Service probe. By Oh Jong-taek

On a sweltering summer day, 82 incumbent DP lawmakers attended an emergency meeting held at Seoul Plaza, where the leadership launched a so-called Headquarters for Public Protests for the Restoration of Democracy and Reform of the National Intelligence Service.

The DP wants the ruling party to be more cooperative in a National Assembly investigation into whether the spy agency conducted an illegal, online smear campaign against its presidential candidate, Moon Jae-in.

Just two weeks before the investigation is scheduled to end, Aug. 15, the parties made little progress in the probe.

The latest dispute is whether to make it compulsive for key witnesses to attend hearings on Aug 7-8, including former NIS Chief Won Sei-hoon and former Seoul police chief Kim Yong-pan.

The DP argues they the Assembly should issue formal order to compel witnesses to attend. The Saenuri disagrees.

“The Saenuri Party is refusing the legislative investigation [into the NIS],” Kim said in a speech. “Our people don’t understand why they are so afraid of calling former NIS Chief Won and former Seoul Police Chief Kim as witnesses.

“The more the Saenuri and the Blue House try to turn a blind eye to the truth, the more people will turn away from them,” Kim added.

Kim pledged to keep the probe going to its legal ending point, Aug. 15.

About 30 DP lawmakers distributed leaflets to passersby after the meeting.

The Saenuri Party held its own emergency meeting and claimed the DP simply couldn’t accept its defeat in December’s presidential election.

“They intend to stage a rally to refuse the choice of people, which was proven by the election, and protest

the outcome of the election,” said Kim Gi-hyeon, a deputy policy maker for the Saenuri Party.

Choi Kyung-hwan, its floor leader, said DP Chairman Kim must have been pressured to hold such provocative rallies by hard-line members of the party’s pro-Roh faction.

“I really feel sorry for the DP leadership, as it’s being dragged by the nose by the hawks,” Choi said.

Kim also announced a plan for the Saenuri Party to hold its own candlelight vigil at Cheonggye Plaza, central Seoul, at 6 p.m. Saturday.

That’s an hour earlier than a large protest called for by some left-wing civic activists.

Kim Kwan-young, a DP spokesman, said at Seoul Plaza yesterday that the party will not prohibit its lawmakers from joining the civic groups’ vigil.

But the party’s leadership has not officially linked arms with the left-wing activists.

DP leader Kim watered down his message during a press meeting Wednesday.

An advance copy of his speech said Kim would say: “I have faith that tens of thousands of candles of truth will be with us,” suggesting he was calling for the same kind of candlelight protests over U.S. beef imports that paralyzed the government in 2008.

When he actually read his remarks, he said, “Tens of thousands of people seeking the truth will be with us,” avoiding the reference to candles.

Yoon Yeo-joon, a politician who worked for the Moon Jae-in campaign last year, was pessimistic about the effectiveness of the street rallies, saying it was more of a game of brinkmanship against the Saenuri Party.

“I doubt how much support they could win for this protest at this moment,” Yoon said in a radio interview with YTN yesterday.

Meanwhile, the Seoul Metropolitan Government said it will levy a fine on the DP for occupying the plaza in front of City Hall yesterday without prior registration. The DP said yesterday it will pay the fine and register its use of the plaza to continue the protests.