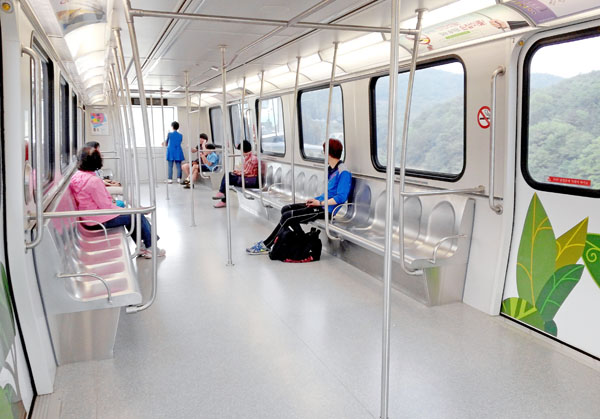 A car on the Yongin Light Rail line sits almost empty. The number of passengers has been much lower than expected and the project is being blamed for the city’s worsening fiscal plight. By Choi Mo-ran

Yongin, Gyeonggi, recently earned the dubious distinction of being the city with the worst debt-to-budget ratio in the country.

One of the main culprits behind its plight is the Yongin Light Rail Project, which was completed in July 2010 on a build-operate-transfer model, in which private builders shoulder the costs of construction and later retrieve the investment by running the operation.

But the Yongin city government has refused to grant the company that sank 1.03 trillion won into building the railway the right to open it for business, citing the possibility of faulty construction. The firm took the city to court and ended up ordering the city government to pay 778.7 billion won in damages.

To pay off the money, Yongin began issuing local bonds in April last year. They’re now up to 515.3 billion won.

Yongin is not alone. Incheon’s debt-to-budget ratio is also high at 37.6 percent, followed by Daegu at 32 percent and Busan at 31 percent. 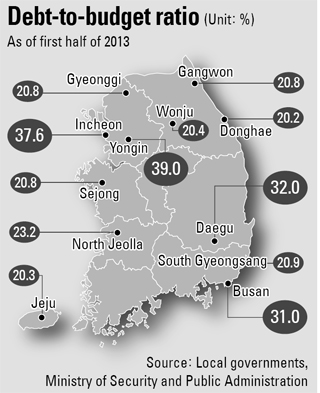 Major American cities are also having a tough time balancing their budgets, as exemplified by Detroit’s filing for bankruptcy last month and becoming the largest city to do so in U.S. history.

Many municipalities in Korea face a similar fate as local government officials throw money at extravagant yet often inviable projects in an effort to appeal to voters.

A prime example of such white elephants is the O2 Resort, a tourist destination that has ski and golf courses and a hotel, which opened in 2008 in Taebaek, Gangwon. Located near Mt. Hambaek, the resort is now 339.2 billion won in debt, whereas Taebaek’s annual budget is only 290 billion won. The resort now incurs nearly 25 billion won in losses every year as it can’t attract enough tourists.

“The failed resort project is a result of a lack of professional business insight and illogical investments by the municipal government. And yet, no one is being held accountable for the botched policy,” said Ham Uk-chul, administration director at the Taebaek Chamber of Commerce and Industry.

Built to attract tourists to Wolmi Island by connecting it to Incheon Station via an 8.3-kilometer monorail, the rail line may never be opened due to mounting safety issues. After a safety inspection, the Incheon Transit Corporation reported in May that the line required a complete overhaul, which would cost more than 30 billion won. All that would have to be paid by taxpayers.

The fact that Incheon is scheduled to host the 2014 Asian Games is aggravating its financial woes. To finance the construction of sports stadiums and facilities, the already-indebted city has issued 844.8 billion won in local bonds over the past four years.

Experts say in order to prevent further white elephants, the introduction of a U.S.-style financial revival program, in which municipalities can file for bankruptcy protection, could be one option.

“The U.S. bankruptcy program for local governments tries to give local officials a sense of fiscal responsibility and independence,” said professor Kim Jae-hoon, who teaches government administration at the Korea Advanced Institute of Science and Technology.

“To alert municipal officials about their irresponsible spending, we need an overhaul of the current financing oversight system to warn local heads of the grave consequences [of their wasteful projects].”