No radiation from Fukushima is found in Korea

No radiation from Fukushima is found in Korea 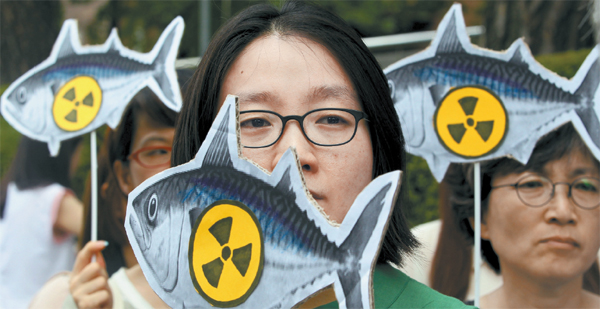 Environmentalists protest imports of agricultural and marine products from Japan without radioactivity testing in front of the Japanese Embassy in Seoul yesterday. Tokyo Electric Power has admitted that radioactive water from the troubled Fukushima nuclear power plant is seeping into the ocean. [AP/NEWSIS]

Korea’s Nuclear Safety and Security Commission said yesterday that following an incident at the troubled Fukushima nuclear reactor last month, no radioactive material was detected here and the leak did “not have an impact on the Korean Peninsula.”

This follows concerns from a July 18 incident when steam was billowing out from the Fukushima Daiichi nuclear plant’s reactor No. 3 in northeastern Japan as the facility underwent repairs.

Tokyo Electric Power Co. (Tepco) said that the situation was not an emergency after repair workers spotted steam rising from the fifth floor of the plant, which uses lethal mixed uranium-plutonium fuel and stores spent fuel rods in its top floors.

The roof of the building and upper floors were blown off in a hydrogen explosion following the disastrous March 11, 2011 tsunami, which led to a reactor meltdown and leaks of large amounts of radioactive material.

Tepco said the steam was likely due to evaporated rainwater.

The Nuclear Safety and Security Commission said that over the past two weeks, radioactivity was not detected in airborne dust after inspection of 14 regions in Korea.

The committee said the 122 real-time radioactivity monitoring systems have also detected normal levels of radioactivity in the environment.

Japan’s Nuclear Regulation Authority has raised concerns that the reactors are leaking highly radioactive substances into the Pacific Ocean.

Tepco finally admitted last week that the plant was leaking contaminated water. A high concentration of radiation has been detected in water near the reactors, an amount millions of times higher than Japan’s acceptable limit under normal circumstances, the power company added. It said water with a lower amount of radiation leaked into the sea.

The Japanese government has banned fishing around Fukushima.