Want to stay cool? Try some of these hot dishes

Want to stay cool? Try some of these hot dishes 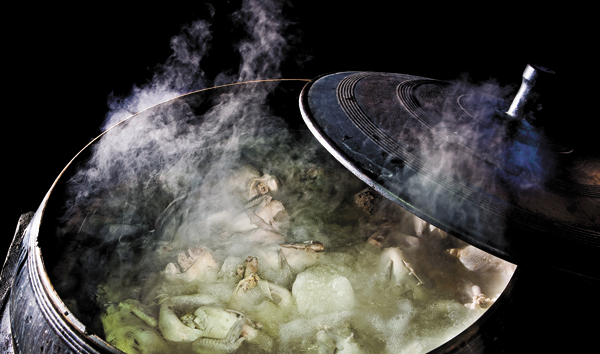 The saying goes that during the hottest months, mid-July to mid-August, that even a grain of rice stuck to your lips is too much weight for a person to bear.

And it is for that reason that Korean dishes that are popular during these days are high in protein - typically chicken or dog meat - in order to put some zing back into exhausted people.

Another characteristic shared by the food eaten during the three bok nal (July 13, July 23 and Aug. 12) is that they are all hot food - soup, stew, broth or roast meat.

These hot foods are supposed to help fight fire with fire and are believed to keep you cooler for longer.

Koreans have long believed it is a better strategy to fight the heat head-on rather than to avoid it, at least for the sake of the palate.

This tradition lives on today in the dishes still enjoyed by contemporaries. Chinese medicine Professor Go Suk-jae at Kyung Hee University Hospital in Gangdong District, eastern Seoul said, “stamina and body heat escapes through the skin during summer,” and thus, “eating chicken, dog and ginseng and other heat-producing foods help keep the organs warm, which is good for the body.” 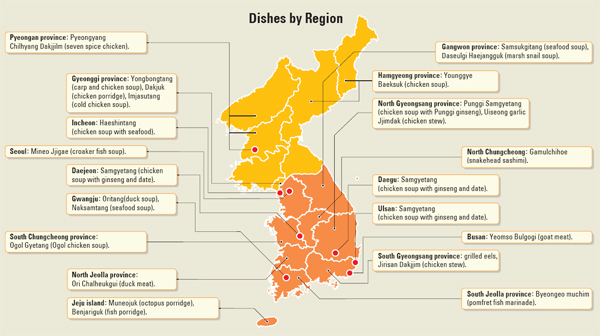 Although samgyetang (ginseng chicken soup) and boshintang (dog meat soup) are iconic summer foods, there are many more from around the nation that contain just as many benefits as the two dishes.

Apart from samgyetang, there are other chicken dishes like chogyetang (cold chicken broth with vinegar) and jjimdak (spicy chicken stew).

Professor Lee Eui-joo from Kyung Hee University Oriental Medicine Hospital said, “Samgyetang is best for those with cold organs (from an Oriental medicine perspective). However, if you retain a lot of heat, samgyetang can lead to constipation or diarrhea because of the properties contained in the date and ginseng.”

For those who want to try something different, yongbongtang, is a dish from Gyeonggi and North Chungcheong. Having been a regular fixture on the royal table during the Joseon Dynasty (1392-1910), it is a mixture of carp and Korean Ogol chicken.

Each region will have its own take with distinct ingredients. In Jincheon, North Chungcheong, they add in soft-shelled turtle.

It’s not just in Korea that carp is regarded so highly. In ancient China, legend has it that a carp jumped over a waterfall and became a dragon - the saying “Deung yong moon” (which means to reach the gateway of the dragon) derives from the tale.

Thus yongbongtang is associated with superpowers and is thought to contribute to long life.

Another staple at this time of year is, of course, dog meat. Professor Ahn Yong-geun, a professor of nutrition and health at Chung Cheong University said that of all the meats, dog meat has the best ratio of unsaturated fat content.

“In terms of protein, it contains as much as all other meats, but it gets absorbed and digested most effectively, which is perfect for hot summer days,” said Ahn.

For those who can’t stomach man’s best friend, yukgaejang (spicy beef broth) is the perfect alternative. It’s not for nothing that they call it “dog meat soup cooked with beef.”

Professor Jung Hye-kyung from Hoseo University said that “yukgaejang, traditionally, was cooked with rare ingredients like abalone and sea cucumber and was considered dog-days food for the aristocrats.”

There are also dishes made from fish of all kinds. Seoul has mineo maeuntang, or croaker fish stew; in Gangwon Province there is daeseulgi haejangguk, or marsh snail soup; North Chungcheong has gamulchihoe, or snakehead fish sashimi; South Jeolla Province has byeongeo muchim, or pomfret marinade; while Jeju Island has benjariguk, chicken grunt fish soup.

Fish soup is high in protein, contains a healthy dose of omega-3 and many vegetables. It’s also semi-fluid, which means it’s great for patients, the elderly and kids.

Historically, those in Chungcheong and Pyeongan provinces made the most out of fish.

A manuscript from the Joseon Dynasty highlighted the benefits of eating porridge for breakfast: it improves complexion; raises your energy level; adds years to your life; calms the mind and body; helps you talk well; eliminates physical ailments; helps digestion; improves your voice clarity and keeps hunger away while keeping you hydrated.

In North Chungcheong, where there is no ocean nearby, folks used to enjoy freshwater fish like carp and snakehead sashimi to keep cool.

Professor Ji Myung-soon from the Department of Food Service and Culinary Arts, said that “marinating snakehead in makgeolli (rice wine) for six to eight hours, leads to a perfect fermentation.”

According to Ji, “The fishy odor is eliminated and the meat is then best served with red-chili pepper paste and vinegar.”

In North Korea, dishes with “gom” at the end of the name are popular heat-busters. Contrary to belief, these meats in these “gom” dishes don’t turn into jelly from hours of simmering. Dakgom is chicken soup with ginseng, milk-vetch root, chestnut and glutinous rice.

After all these ingredients are placed inside the chook’s belly, the soup is cooked on medium heat. Lee Ae-ran, from the North Korea Food Research Institute, said that variety was the cure to the summer’s heat. “During the three dog days, I remember people were crazy about dog meat soup, chicken soup and rabbit soup, too,” said Lee.