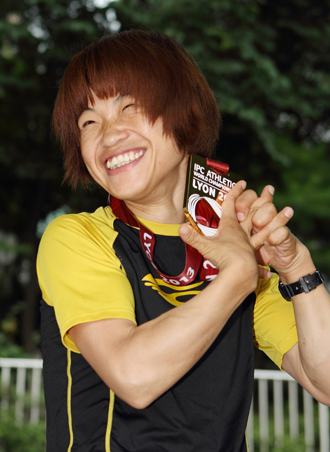 Jeon Min-jae vigorously nodded her head “yes” when she was asked, “Do you like running?”

The 36-year-old champion of the 2013 IPC Athletics World Championships in Lyon, hosted by the International Paralympic Committee, carries a big smile even in front of strangers, if they talk about running.

Last month, Jeon grabbed a gold medal in the women’s 200m race for athletes with cerebral palsy, with a record of 30.96 seconds.

Jeon said running is her favorite job and that making a hard effort was the only reason she could get the No.1 spot.

It was her first victory in an IPC race, and she is the first Korean female disabled athlete to win the race. Jeon also won a silver medal in the 100-meter race.

Her daughter was diagnosed with cerebral palsy when she was 5.

She was a fast learner and smarter than any of her five siblings before she became sick. But she lost control of her body movements and cannot talk.

Young Jeon had a dire childhood, her mother said.

Jeon went to elementary school at 19, 11 years later than other kids. She practiced writing with her feet and dreamed of becoming a painter.

However, her dream changed unexpectedly.

When Jeon turned 26, she just began running as if she were destined to do so. An encounter with her middle school physical education teacher, Kim Haeng-soo, changed her life. Kim found Jeon’s talent in running and trained her. Jeon clinched a gold and silver medal in a national race in her first year of running.

Jeon has also made her own training system, which includes weight training, jogging and a special diet.

There were many trials and errors in the beginning, her mother recalled.

Jeon’s toenails were so fragile that they fell off as she practiced running on hard ground. She had to find softer ground like pepper farms to run on.

At 146 centimeters tall, Jeon was also shorter than other athletes.

“I am also short, and my daughter couldn’t get taller because I didn’t feed her well,” her mother sighed.

Longer legs are essential to 100- and 200-meter runners. To overcome the weakness, Jeon had to try harder to make a faster start.

Despite her physical disability, Jeon is more diligent and clever than anyone, Han said.

“Min-jae does all the house chores, since we are busy working at our farm in North Jeolla,” she said.

Even though she is not free to move her hands and arms, Jeon cleans up her house perfectly without a strand of hair left, Han said.

Jeon is also a woman before being an athlete. While strictly keeping her diet rules to grow muscles, she drinks sweet coffee like vanilla latte. Like normal ladies, she enjoys online shopping. Jeon loves to wear skirts and wears makeup when she isn’t training. On her laptop and smartphone, tons of photos of actor Won Bin are saved. Her shy wish is to meet Won Bin one day.

Jeon wrote the number 40 on a table with her fingers.

“Min-jae’s goal is to run until she becomes 40,” Han said. “Her ultimate goal is to win a gold medal in the 2016 Rio De Janeiro Paralympics.”

On her smartphone, Jeon wrote, “I wish we make an environment where disabled athletes can focus on practicing sports.”