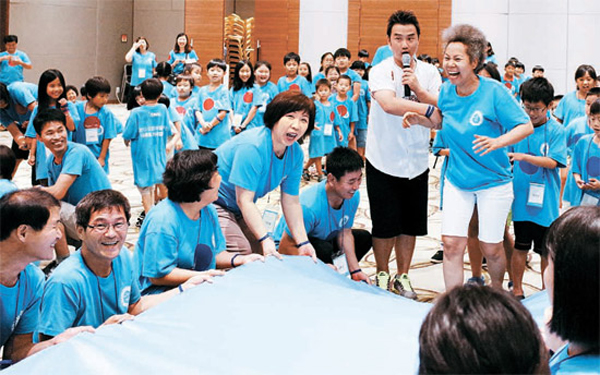 Singer Insooni, right, at a camp she organized for multicultural families. By Han Young-ik

The three-day “Dream Camp for Multicultural Families“ was recently held at the Donggang Cistar Resort in Gangwon Province, from July 22 to 24. At the camp, 83 mixed, international families - 288 people altogether - gathered from around Gangwon Province to have fun and share enjoyment with people of similar backgrounds.

The inspiration behind the camp was none other than Insooni, 56, one of Korea’s most famous singers. Born to an African-American father and Korean mother, Insooni has long been concerned about multicultural families and causes, recognizing the troubles they can face in Korea.

“I am so happy that I finally made a trip with my daughter,” said Kim Josephine, 46, who originally is from the Philippines. Kim came to the camp with her 14-year-old daughter Hyun-jung, and even though the trip took four hours by bus, both mother and daughter were smiling. “I don’t feel tired at all,” said Kim.

Kim said this event meant a lot to her and her daughter because life had been tough since her husband died in a car accident four years ago. Forced to become the sole breadwinner, there has rarely been time or money for family trips. “I organized this event to create an opportunity for not only multicultural children but also for people around them to share their dreams,” said Insooni.

Insooni, whose real name is Kim In-soon, has long been an advocate for multicultural families. She founded an alternative school, Hae Mill School, in Hongcheon, Gangwon, in April, where nine children born to parents from five countries - Korea, Germany, the Philippines, Japan and China - attend. Currently, the school is directly financed by Insooni, without any additional sponsorship yet.

“I wanted to return love that I received, in addition to sharing the hardships, loneliness and painful moments,” she said.

The JoongAng Ilbo sat down with Insooni to talk about the event, the school and her goals.

Q. Did you have any particular event that inspired you to set up the school?

A. There are so many multicultural families in rural areas, which often lack social infrastructure. A few years ago, I came across an article that mentioned how only 28 percent of students from multicultural families managed to graduate high school. I was very struck by the survey and decided to create the school. I’m so grateful that so many people came forward to contribute their talents in such a short time.

You seem to care much about the importance of communication among families.

Yes, because I am also from a multicultural family. I’m 99 percent Korean, but the other 1 percent has always haunted me. However, my family and neighbors filled the emptiness in me. So, when I think of them, I still feel like I can never be beaten. I think close people, including family, should fill that 1 percent emptiness. That is why I held another cultural exchange that focused on the elderly. Communicating with family and people is essential for all people as well as among multicultural families.

What is the goal you want to achieve through these projects?

I hope these children feel a glow of pride in their nationality. I know it is impossible for all of them to grow to be influential, but it would be great if some of them become socially successful, so they can be role models and integrate into Korean society. Honestly, I just like playing with kids, that makes me happy. That is the spirit in which I start all these project and in which I will continue working on them.