Youths get taste of military, history

Youths get taste of military, history 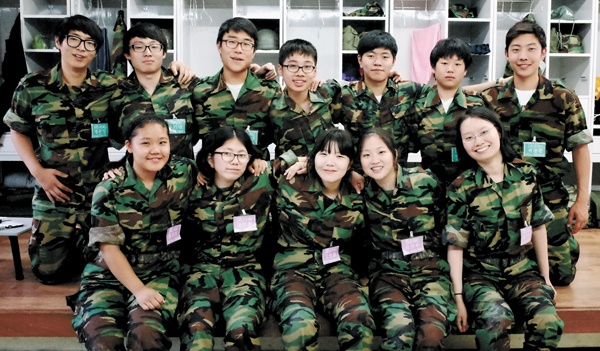 A group of youths take part in an 11-day camp organized by the Young Korean Academy to learn about significant modern Korean history sites. As part of the tour, the youths were put through military exercises at a Korean Army base in Hwacheon, Gangwon. By Han Young-ik

Seventy-eight students recently participated in an 11-day national heritage tour designed to raise youths’ awareness of modern Korean history. The tour, which ended Thursday, was organized by the Young Korean Academy and sponsored by the Ministry of Patriots and Veterans Affairs.

“I always wanted to serve for the country my grandfather had defended with his life - and upon visiting the front, my desire to do so has got stronger,” said Bae Han-sung, 19, whose grandfather was captured by North Koreans during the 1950-53 Korean War but managed to escape. “I will enlist in the army [for the required service] for sure, and I’m planning to become a diplomat in the future.”

The group, which included ethnic Koreans living abroad, 20 descendants of independence activists and Korean War veterans, and domestic students, visited the 15th division of the Korean Army in Hwacheon, Gangwon. The tour started with a worship ceremony at the National Memorial Board, followed by a march near Imjingak and a military experience at the base.

As part of the experience, participants were put through a CBR (chemical, biological and radiological) exercise at the division’s recruit training center. Instructors set off a smoke grenade and participants scrambled to put on their gas masks. Amid the mild mayhem, domestic students helped second-generation Korean-ethnic students from abroad who may have had trouble understanding instructions in Korean.

Kang Hyun-taek, a descendant of an independence activist had saved up for the tour and spent it all on the flight from the United States.

“My father spoke of how my grandfather was incarcerated for collecting and delivering funds for the independence effort,” Kang said. “During this tour I got to see many different places of my country, and it’s quite moving.”

“My grandfather talked a lot about the Battle of White Horse,” Oh said. “Here, it isn’t far off from North Korea and to think my grandfather fought just there feels strange.”

Kim Min-soo, 21, whose grandfather had participated in the Wonsan landings along with many other battles, came from the United States for the tour.

“I wanted to see the origins of Koreans’ pride, so I joined the tour,” Kim said. “The weather isn’t conducive to the tour, but it’s meaningful to be able to experience camp life on the front.”

After their military experience, the group visited the Andong School of Korean Etiquette, Daegu Dabu-dong battlefields, and the Seodaemun Prison in Seoul, where independence activists had been incarcerated by Japanese colonialists.