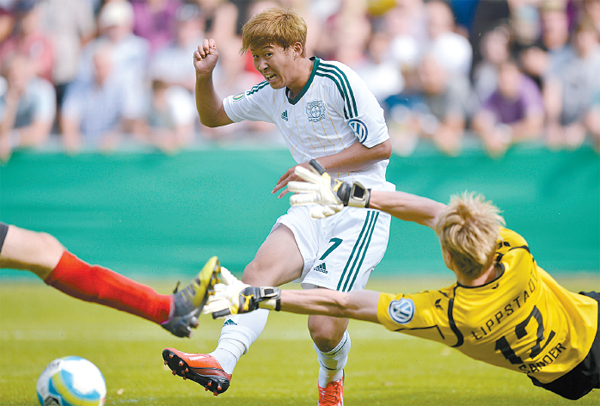 BERLIN - Borussia Dortmund defeated fourth-division Wilhelmshaven 3-0 in the first round of the German Cup on Saturday, while Bayer Leverkusen beat fifth-tier Lippstadt 6-1 to progress.

Dortmund, the 2012 winner, struggled to break down the home side’s resolute defense until Kevin Grosskreutz opened the scoring in the 71st minute. Marvin Ducksch secured the result in the 83rd, before Robert Lewandowski added some gloss to the score in the last minute.

“We didn’t put on an outstanding football game, but if the Wilhelmshaven goalkeeper hadn’t had a day of cream and sugar, we would have decided it earlier and more convincingly,” Dortmund coach Juergen Klopp said.

Both Sidney Sam and Stefan Kiessling scored twice in Leverkusen’s win, with Lars Bender and halftime substitute Son Heung-min getting the other goals.

Meanwhile, Cristiano Ronaldo scored in the 17th minute and set up Mesut Ozil’s goal 14 minutes later, leading Real Madrid to the final of the International Champions Cup with a 2-1 victory over Everton on Saturday night.

Ronaldo and Ozil starred in the first football game played at the 51-year-old Dodger Stadium, keeping Real Madrid unbeaten in its preseason friendlies.

Second-half substitute Nikica Jelavic scored in the 61st minute for Everton, which gave a solid challenge to the Galacticos. Tim Howard, Everton’s American goalkeeper, made a handful of brilliant saves to keep Real Madrid from increasing its lead.

The final is Wednesday night in Miami, where Real Madrid will face the winner of Chelsea’s meeting with AC Milan outside New York on Sunday.

Just two weeks away from the season opener in La Liga, Real Madrid had more than enough talent to overcome Everton.

In preparation for football’s debut in Chavez Ravine, the Dodgers flattened their pitchers’ mound and spread temporary grass over the infield and warning track.

Dodger Stadium has hosted the Beatles, a papal Mass, eight World Series and 52 Dodgers seasons, but had never converted its baseball-specific field into a football pitch.