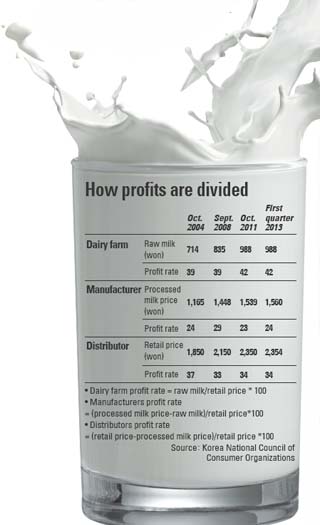 Amid the recent hype over dairy companies’ plans to raise milk prices despite the government’s request not to, a consumer group claimed the increase is excessive and will only benefit manufacturers and distributors.

The Korea National Council of Consumer Organizations said yesterday that a 250-won ($0.22) per liter increase is too much considering raw milk has gone up only 106 won.

“Using the new system and pushing forward with the increase disrespects consumers,” the consumer group said in a statement.

Since Thursday, a new sliding scale price system that links the price of raw milk to production costs and the previous year’s rate of inflation, was implemented.

The consumer group said that under the new pricing system, raw milk has gone from 834 won to 940 won per liter. But leading dairy companies Seoul Milk and Maeil Dairy decided to raise their milk products by 250 won this month.

The consumer group said the 250 won increase not only includes manufacturing and distribution costs, but increased profits.

When a consumer buys a liter of milk, 42 percent of the profit goes to farms, 34 percent to distributors and 24 percent to processors.

“Manufacturers and distributors should not add to the burden on consumers by raising the price without offering specific reasons regarding production and distribution costs,” the consumer group said.

It also added that the government should design a system that would reflect consumer interests when setting product prices.

Last week the government asked dairy companies to refrain from raising prices because it would increase the burden on consumers not only for milk, but for related products such as baked goods and cheese.

However, the dairy companies said they could no longer maintain the current price, which had been unchanged for the past two years due to government pressure to hold down inflation.

Since the beginning of the year, consumer prices have fallen far below the central bank’s minimum target of 2.5 percent and have been growing in the 1 percent range, raising deflation concerns. Despite low inflation, many consumers still say the prices of food products are a burden considering disposable income hasn’t improved and debt remains high.