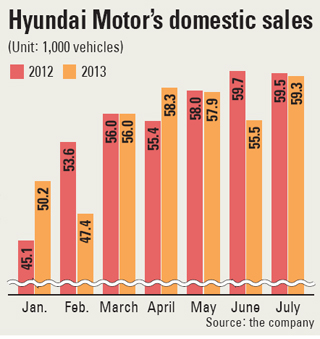 Hyundai Motor is starting its engine to revamp its struggling domestic sales as the nation’s largest automaker tries to boost customer service and turn the tables with new models.

Last week was a vacation period for most employees, but Hyundai Motor Group Chairman Chung Mong-koo gathered the company’s top executives on Monday and ordered them to check business strategies and future plans.

Although uncertainties remain in overseas markets, Hyundai has been cruising in foreign countries. While the BRICS (Brazil, Russia, India and China) area has been leading overseas sales growth, Hyundai also was happy after its July sales in the United States had a 6.4 percent on-year increase to 66,605 units, which was its highest July sales figure in the world’s second-largest auto market.

However, Hyundai is struggling on its home turf. While other automakers, including Hyundai’s small affiliate, Kia Motors, saw an improvement in domestic sales last month, Hyundai was the only local automaker to suffer a drop in July sales compared to a year ago. According to its sales data, the automaker sold 59,302 units last month, down 1.1 percent from last year.

Although its full-size sedan Grandeur took the crown among domestic models after 8,140 units were sold in July, Hyundai’s total passenger car sales dropped 7.4 percent on-year to 30,687 units. Small commercial vehicle sales were 6.7 percent lower than a year ago after only 11,379 units were sold, while large commercial vehicles, such as buses and trucks, fell 37.4 percent on-year to 1,660 units.

To beef up sales, Hyundai also trimmed its car prices by 300,000 won ($266) to 1.5 million won, for August. The company has high expectations for its new Avante model (known as Elantra in overseas markets), which will be released this month, along with a diesel version. This is the first time in four years that Avante Diesel is coming out to the market, equipped with a 1.6-liter engine. It is expected to compete against imported cars that are predominantly fueled by diesel.

However, experts have warned that things will not be easy for Hyundai to boost sales on its home turf during the rest of this year.

Hyundai, along with Kia, is the only automaker that hasn’t finalized annual wage negotiations with its labor union. Hyundai’s union already announced that it can conduct industrial actions if its demands are not accepted. In addition to wage bargaining with the union, Hyundai is negotiating with its irregular workers who are asking for permanent positions in the company.

A worsening brand reputation is another problem. Hyundai has been in the hot seat after Korean customers complained that they experienced water leaks in their vehicles after heavy rain in recent months. One of the defective models was reportedly the Santa Fe DM.

Last week, Hyundai gave a rare apology for the incident. It also decided to give free repairs and extended warranties for cars damaged by water leaks. Previously, warranties for water leaks covered three years or 60,000 kilometers (37,282 miles), but under the company’s new policy, they will be extended to five years, regardless of the total distance of driving.