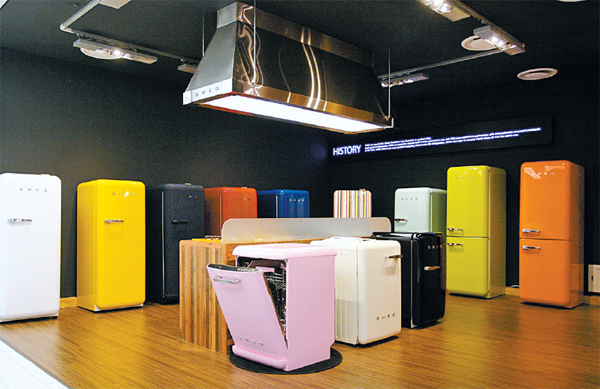 Smeg refrigerators in various colors are on display at a popup store inside Galleria Department store.

The Italian refrigerator brand Smeg, dubbed the Gangnam refrigerator, is making a buzz in the local refrigerator market, despite its simple functions, lower internal capacity and a price tag six to seven times higher than other refrigerators.

Smeg is a vintage-style refrigerator with rounded corners and a cute design that grabs attention in distinctive red, mint and pink colors.

They were mainly sold through online shopping malls but Smeg opened a temporary store on the fifth floor of the Galleria Department Store’s Luxury Hall West in Apgujeong, Gangnam, southern Seoul in February.

Such temporary stores are often called pop-up stores because they usually operate for one or two weeks at most. However, the Smeg store has been operating for six months.

“The store will still operate next month. There is no plan for withdrawing the store for the time being,” a spokesman for Galleria Department Store said.

The secret of the store’s longevity is the brand’s unexpected popularity. Since March, monthly sales have exceeded 100 million won ($88,925). 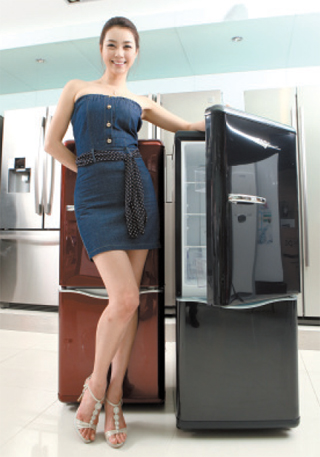 A model presents miniature refrigerators from Dongbu Daewoo Electronics. Provided by the companies

However, Smeg refrigerators are very expensive. The smallest 120-liter (31.7-gallon) product with only the refrigerating function is 1.9 million won. A 150-liter refrigerator made by Samsung Electronics with both refrigerating and freezing functions retails for 330,000 won at large discount store chains.

Smeg’s most expensive model, a 328-liter, two-door refrigerator that costs 4 million won, is about seven times higher in price than a similar Samsung model, which costs 550,000 won. The only special feature inside the refrigerators is a metal wine rack.

The key to their popularity is the design, some say.

“Those in their late 30s to 40s, who are interested in designs of home electronics, are the main customers. Separate from existing refrigerators, the Smeg refrigerators are popular as the second refrigerator in the office or study to place them for decoration,” said Kim Yong-kyoon, a life and culture buyer at Galleria Luxury Hall.

They are also popular with single households and newlywed couples, who do not need large refrigerators.

Dongboo Daewoo Electronics released a 150-liter refrigerator last month, which sold more than 2,000 units in less than one month at some discount stores and general merchandising stores.

Dongboo Daewoo Electronics said it used primary colors aimed at single consumers and made the model as energy efficient as possible, targeting the second refrigerator market as the key factors to its success.

In design, it applied primary colors on a high-gloss iron plate, unlike its existing refrigerators, and featured a distinctive retro design with silver door handles and rounded corners.