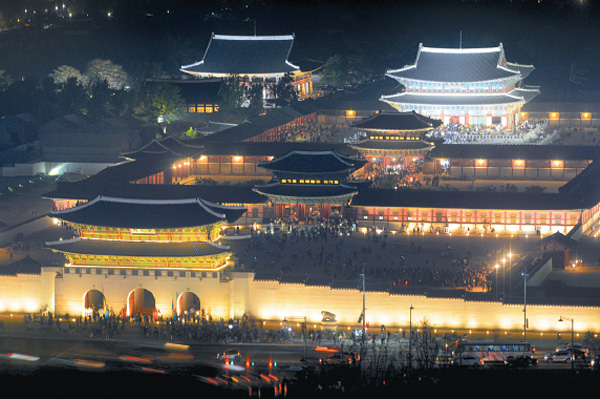 The number of visitors to Gyeongbok Palace during the May night-viewing program rose 69 percent this year compared to a year ago. [JoongAng Ilbo]

Exploring palaces at night is such a thrilling experience.

However, the thrill can become annoying when the palaces are explosively crowded, with people bumping into each other and street vendors lined up near important cultural property, using liquefied petroleum gas to cook snacks. It gets even worse when disrespectful people spread out mats, lie down and throw litter around - as if the palace grounds were a picnic area.

This is what happened at the Gyeongbok Palace, Korea’s state-designated cultural property (Historic Site No. 117), which used to be the main palace for the 500-year ancient Joseon Dynasty (1392-1910).

The Culture Heritage Administration, which oversees the management of the palace, has been opening it twice a year at night - in May and October - for five to six days each time since 2010. The CHA has also been opening Changgyeong Palace for night viewing since 2011.

Exploring palaces at night is a rare experience, and it’s available for only a limited time for a cheap price. At 3,000 won ($2.69) per ticket, people flocked to the palaces. Tens of thousands of people lined up to get in every night during the program. The limited number of officials in charge of ticketing and security had a difficult time controlling them.

On May 26, which was the last day of the May program, one Twitter user put up a post titled “Gyeongbok Palace in Danger” with photos of people lying down, drinking alcoholic beverages and throwing litter. This prompted the media to jump on the bandwagon of blaming the government for not doing enough to protect the palace.

Last week, the CHA said it will limit the number of daily visitors to 1,500 and increase the number of officials in charge of crowd control and security, without mentioning exactly by how much.

“We will also collaborate with the National Police Agency, National Emergency Management Agency and other related organizations and make sure they don’t enter with items like inflammables and alcoholic beverages,” the CHA said in a statement. It added that it will also ban vendors from operating nearby.

Also, the CHA said it will expand the number of days for nighttime palace exploration from 10 to 48 starting next year, saying that its statistics show that the number of visitors to the May program at Gyeongbok Palace rose 69 percent this year from a year ago.

The CHA said it is receiving applications from volunteers to help with crowd control and security checks through the phone and its Web site.(Gyeongbok Palace: www.royalpalace.go.kr, 02-3700-3900-1 / Changgyeong Palace: 02-2172-0104)