Parties fail to agree on whom to call for NIS probe

Parties fail to agree on whom to call for NIS probe 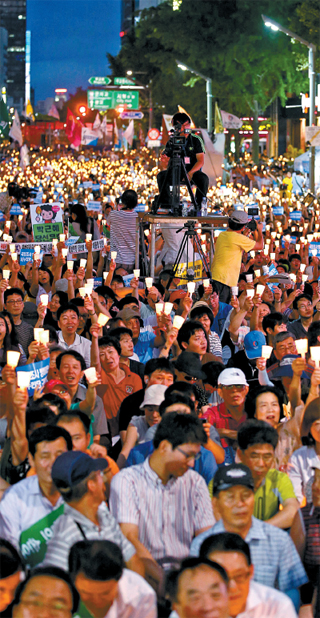 Thousands protest at Cheonggye Plaza on Saturday night against the national spy agency’s alleged meddling in the presidential campaign last year. The opposition Democratic Party also held a rally at the plaza that day. [NEWS1]

While the main opposition Democratic Party continued its fourth day of protests in front of Seoul Plaza, despite scorching sunlight interjected by rain showers yesterday, ruling and opposition party leaders failed to come to an agreement over the investigation into the national spy agency’s involvement in the presidential election campaign last year.

Jun Byung-hun, the DP floor leader, and his Saneuri counterpart, floor leader Choi Kyung-hwan, and two other delegates from each side discussed the DP’s request to subpoena key witnesses and extend the investigation period. But talks ended without progress and negotiations are expected to continue today.

Choi said he hoped “a compromise can be reached through dialogue.”

The DP last week took to the streets to protest the investigation process into the NIS election campaign scandal and called for President Park Geun-hye to apologize over the ensuing controversy.

The DP also requested an extension of the investigation period which is slated to end on Aug. 15.

“Only President Park holds the key to resolving the current political issue,” said DP Chairman Kim Han-gill during the outdoor protests in central Seoul yesterday, and urged Park to speak up about the scandal. He urged the president to enter talks with the DP, saying, “the president should apologize” for any wrongdoing on the Saenuri side and she “has to answer to the people.”

The DP has criticized the ruling party for being uncooperative in the National Assembly investigation into whether the NIS conducted an illegal, online smear campaign against its presidential candidate, Moon Jae-in, last year.

But the Blue House did not release any statement yesterday, continuing to meet opposition party’s demands with silence.

One key Blue House official said, “It is not appropriate for us to respond just because the opposition party makes proposals, and so long as there is the National Assembly, a response is not likely.”

The source said that Park sees the Democratic Party’s ongoing protests as a dispute between the ruling and opposition parties that needs to be solved between themselves, within the National Assembly.

But some criticize the continued lack of reaction from the Blue House, saying it makes Park look like she is ignoring a key issue.

The Saenuri Party called for these issues to be resolved between the parties.

A candlelight vigil on Saturday protesting the NIS’s illegal political intervention in the presidential election was attended by some 3,000 people according to police, including 112 of the DP’s 127 representatives.

But protest organizers claimed that the number of demonstrators was closer to 30,000 people.