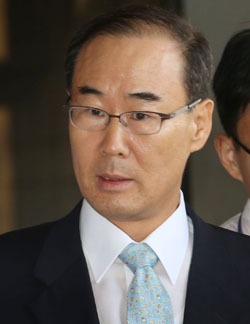 Jun Gun-pyo, 58, a former chief of the National Tax Service who was jailed on a bribery charge a few years ago, has been detained again on suspicion of taking bribes from officials of CJ Group.

The Seoul Central District Court issued a warrant on Saturday afternoon to detain Jun on suspicion of accepting $300,000 and a woman’s Frank Muller watch from Shin Dong-ki, vice chairman of the CJ Global Holdings, in return for helping CJ avoid paying a fine in 2006.

Tax investigation unit IV of the Seoul Regional Tax Office found that CJ evaded hundreds of billions of won in taxes, but didn’t require it to repay 350 billion won ($311.7 million) as it should have. Prosecutors suspect that Jun exercised his influence over the Seoul office.

After questioning Jun on Thursday, prosecutors sought a warrant to detain the former tax chief on Friday for further investigation. After Jun surrendered to defend himself in a hearing Saturday, the court granted the prosecutors’ request after reviewing investigation reports and evidence, including the 20 million won Frank Muller watch.

“The court judged that the allegations against Jun need to be investigated more,” said Kim Woo-soo, senior judge of the central district court. “There is a possibility Jun might flee or destroy the evidence.”

Jun was held at the Seoul Detention Center on Saturday. Prosecution sources said Jun, who had denied the allegations, admitted receiving the cash in a written statement submitted to the prosecution prior to his questioning on Thursday, but denied providing any favors in return.

Jun was jailed in December 2008 for three-and-a-half years for taking 79 million won from the former head of the Busan Regional Tax Office for his role in getting him the job in 2007.

The arrest gave Jun the dubious distinction of being the first NTS commissioner to be jailed during his term since the agency was established in 1996.