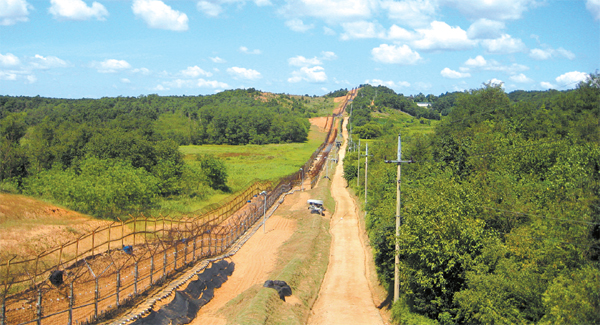 Korea’s Demilitarized Zone is known as the most heavily fortified border on the planet, a buffer area between North and South Korea studded with land mines, barbed-wire fences and watchtowers.

As every visitor to the DMZ is instructed, a lush, natural ecosystem has blossomed amid the armaments. The DMZ is home to thousands of species, including endangered ones like red-crowned cranes, musk deer and rare amur gorals.

But incursions of farms and other development projects in the future threaten that unique ecosystem.

Chun Jae-kyong, representative director of the National Nature Trust, says Global Trust will encourage foreign and local donors to help buy privately owned land in the DMZ to preserve its ecological heritage not only from current agricultural activity but also potential development projects in case of reunification.

“We want to ensure that people trust us in the work we do,” said Chun during a launch event at Kintex in Gyeonggi on July 19. “And that is for the benefit of biodiversity, the local resident as well as the future generation.”

Global Trust is a form of shareholding system modeled after Green Shares, a scheme used by Friends of the Earth in Germany (BUND) for the Green Belt campaign, an environmental program for the areas around the former border between East and West Germany. In return for their charitable contribution, donors will receive a certificate and the right to be informed about how the program is going, said Chun.

“The Trust will hold a general meeting once a year, as well as a few supplementary meetings,” Chun said. “We have a council of members’ (donors) representatives, from which the board of directors is elected. For transparency in accounting, the Trust will issue reports to be examined by the council and the minister of environment,” said Chun.

He added that the Trust would focus on soliciting foreign veterans of the 1950-53 Korean War and people who have a history of dealing with Korean in business or as diplomats. “We will also reach out to tourists [who come to Korea],” Chun noted.

Around 30 to 40 percent of the land in the DMZ areas is privately owned. Scientists and environmental groups see agricultural activity like ginseng farming as the main threat to the DMZ ecosystem.

Land that the Trust aims to purchase include the Paju, Gyeonggi portion of the Civilian Control Zone by the river Imjin, an area of around 1 hectare. It is negotiating the donation of land in the area. It’s also interested in the Haean Basin in Gangwon Province, the site of an intense battle during the Korean War.

By the end of this year, the Trust is hoping to clinch donations of 1 hectare (2.47 acres) worth of land.

The Ministry of Environment has found from surveys since 2008 that the entire DMZ is home to 5,097 species, including 106 endangered ones.

Asked whether a German model would work in Korea where environmental awareness is not as strong, Chun said to overcome this barrier, the Trust stays away from legal jargon and uses more common catchphrases to broaden the appeal of its message.

During the launch event, experts from around the world, including Germany and Vietnam discussed their own experiences of environmental preservation and possible strategies for the Korean DMZ.

Dr. Uwe Riecken, a German representative from the European Green Belt Initiative, said having the DMZ “legally protected as part of the national heritage” is a crucial element “as our experience shows.” He highlighted the importance of politicians “to be involved at all times,” adding that this was certainly critical for the Green Belt Initiative.

Chun also spoke of the need for civilian groups to cooperate with the government, and the difficulty of dealing with environmental issues without joint action.

“For the last ten years the South Korean government has sought UNESCO biosphere reserve status for the DMZ, but lackluster cooperation from Cheorwon County, whose territory occupies a central position in the DMZ, has resulted in a delay,” said Chun.

Recently, the Park Geun-hye administration pushed for the building of an international peace park in the DMZ. But civilian groups and scientists say environmental concerns must be addressed properly before development plans could go ahead.