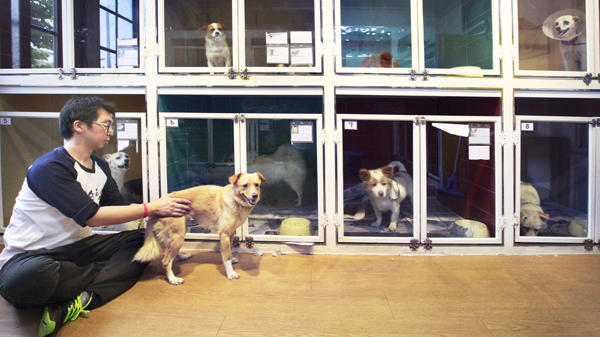 Kang Byung-hyun of the non-profit Coexistence of Animal Rights on Earth (CARE) puts an abandoned dog back into a cage after a walk. The organization takes care of some 200 abandoned dogs and cats. By Park Sang-moon

Walking her dog on a sidewalk in Seoul, Ms. Kwak, 35, looks like any other devoted pet owner.

She’s anything but. Kwak makes a sharp, furtive turn into a secluded alley. She ties the dog’s leash to the handle of a trash can. With a heavy sigh, Kwak quickly walks away without a glance back at her abandoned pet.

“I received a dog recently as a present from a family friend,” she tells the Korea JoongAng Daily. “But with the deadline for registration quickly approaching, I was forced to abandon him because I didn’t want to be stuck with the dog.”

The government is requiring all pet dogs to be registered and to carry identification in the form of an implanted microchip or a regular name tag by the end of this year.

The new rule is supposed to discourage pet owners from abandoning dogs and also help lost dogs be reunited with their owners. The fine for failing to register within the deadline will be above 1 million won ($890), according to an official at the Animal and Plant Quarantine Agency.

Ironically, the registration law is testing owners’ commitment to their pets. Some are failing that test and are rushing to abandon dogs before they can be traced back to them.

A 51-year-old woman surnamed Lee also felt compelled to put her dog on the street after learning about the new rules.

“When a veterinarian told me that there was a new registration law that we had to follow, I realized that the commitment was too heavy for me to bear in the long run,” Lee says. “So, I left the dog at an elementary school in the hope that a student would pick him up.”

The Coexistence of Animal Rights on Earth (CARE), a non-profit organization that takes care of abandoned dogs and cats, says it has seen a spike in abandoned dogs.

Staff at the organization said that they offer shelter for some 200 cats and dogs and recently saw an increase in the number.

“We now don’t have spaces for any more dogs found on the streets,” says Kang Byung-hyun, a CARE staffer.

Seoul has had the highest rate of dog abandonment in Korea.

“Since 2011, the number of abandoned dogs has been rising steadily,” says an official at the Animal and Plant Quarantine Agency agency. “I expect the numbers to hit a record high in 2013.” He admitted that it’s possible the registration law is “actually encouraging more people to abandon animals in the short-term.”

“People panic when there is any mention of a fine,” says Park Wan-gu, a former veterinary doctor in Yongsan, central Seoul. “New pet owners, especially those who feel that pets actually might not be a good fit for them, are scared into abandoning their pets when learning of the registration law.”

Mr. Hong, 40, who bought a dog a few weeks ago as a present for his daughter, was worried about the fine. “I discovered there were many fines involved with relinquishing ownership over a dog,” says Hong. So he abandoned his daughter’s pet.

“It was an unfortunate turn of events,” he says, “but if I had registered the dog, I would have been stuck with him with no way out for rest of his life.”