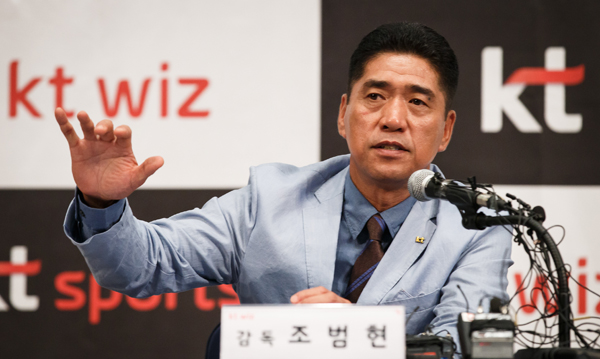 Cho Bum-hyun, manager of the new Korea Baseball Organization club KT Wiz, said yesterday he will try to follow the NC Dinos’ formula of recruiting the best available players for each position on the team. [NEWSIS]

Cho Bum-hyun, the manager of the new Korean professional baseball club KT Wiz, said yesterday that he is aiming to lead the team to the Korea Baseball Organization’s postseason within three years.

Cho, who coached the Kia Tigers to win the Korean Series title in 2009, signed a three-year contract with the 10th KBO team, the Suwon-based club announced on Friday. The Wiz, founded upon a unanimous decision by KBO leaders in December, is scheduled to join the NC Dinos in the KBO in 2015, two years after the Changwon club’s KBO debut. The Wiz will play in the Futures League, a second division league, next year.

“I am looking ahead to the next three years,” Cho said at a press conference. “The team will grind in the minor league for the next year and I will try to determine the conditions of each player on my team, such as their physical ability, propensity in playing and ability to adapt to new environments.

“In the second year, the team shall try its adaptability at the first division. In the third year, I will try to build up a team that can compete in the range of the top four teams.”

The Dinos, managed by title-winning manager Kim Kyung-moon, overcame a slow start in their KBO debut this year and have picked up 34 victories in 87 games, putting the new club 8.5 games ahead of the last-place Hanwha Eagles.

“NC has been doing so well so far for a new team,” Cho said.

He credited the Dinos’ better-than-expected run to successful recruiting of players and promised that he will try to follow a similar formula.

“While we are playing in the second division league, we will see whether there are good free agents in a position where we are vulnerable, and consider augmenting the position [with the free agents].”

The league will have a second round of drafts for the next season on Aug. 26. Cho said that he will try to recruit the best talents in the draft. “We need to do the best scouting as we can,” he said. “We will have to avoid selecting the players whose positions overlap each other. Baseball in recent years has gained growth in pitching speed. We need to adapt to a speedy ball game. I would like to focus on bolstering the mound and defense.”

Since stepping down from the helm of the Tigers in 2011, Cho worked as the head of a KBO committee in charge of fostering amateur talents. He then worked as a catcher instructor for the Samsung Lions until taking the offer from KT. He said that it was a time of learning and that he will try to apply it at the helm of the Wiz.

“It was time to reflect on the passion that I have about baseball,” said Cho, who managed the SK Wyverns from 2003 to 2006 and led the Incheon team to the Korean Series runner-up in 2003, adding that he is confident of becoming a better manager.

“I was too young at that time,” Cho said of his time with the Wyverns. “I was not ready to be a manager. Now, I have experiences as a manager - I built experiences for eight years - so there would be a difference between what I am now and what I was back then. I have always assumed a team in the lower rungs of the table. Such experience will also be helpful, I think, in managing the Wiz.”