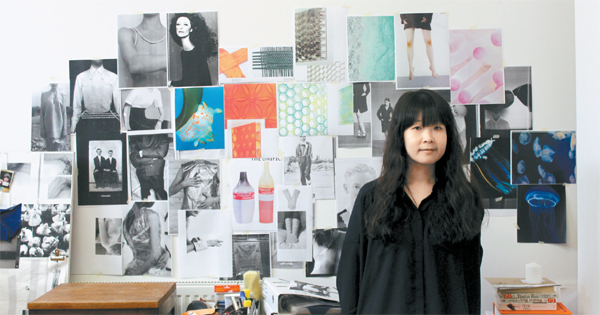 Lee Jung-sun, founder of the fashion brand J. JS Lee, at her studio in London. By Lee Do-eun

Twice a year, the British Fashion Council selects a handful of young designers to take part in London Fashion Week. The support scheme is called “New Generation” and each season only about 10 hopefuls are chosen. But once you make it into this group, the potential is limitless. Not only do you get an exhibition space and models, but it’s a foot in the door to the highest levels of the fashion industry.

Due to the prestige that comes with being chosen by the council, buyers from around the world flock to check out these new talents. Alexander McQueen, Christopher Kane and Marie Courant were once all selected to New Generation designers.

In 2010, the British Fashion Council picked its first Asian candidate, Lee Jung-sun. She had just finished her master’s degree and was already making a name for herself. Her graduation piece picked up the Harrods Award, and some 50 pieces were sold in stores. Vogue’s Sarah Moore called Lee, “the minimalist to follow in the steps of Jil Sander.” In addition, she was hailed by Italian Vogue as the “New Talent Designer of the Year.”

This is the fourth year in a row that Lee was included in the New Generation program.

So far, business is doing well. Her jackets cost around 1.5 million won to 3 million won ($1,342-2,685) and skirts sell for as much as 8 million won each. The brand has been stocked by the high-end fashion brand Dover Street Market since its first season.

Lee also makes a point to sign with just one retailer per city, and so far her collections are available in Milan, Tokyo and Hong Kong.

“If you tell a retailer, ‘I’m only dealing with you so you better up the quantity,’ they usually agree,” says Lee.

For this month, Mui Mui in the ritzy neighborhood of Cheongdam-dong, southern Seoul, will also stock Lee’s collection. Mui Mui specializes in imported designer goods, but in this case they made the first move and contacted the Korean designer. “I think they saw me as a designer of Korean descent rather than a Korean label,” says Lee. 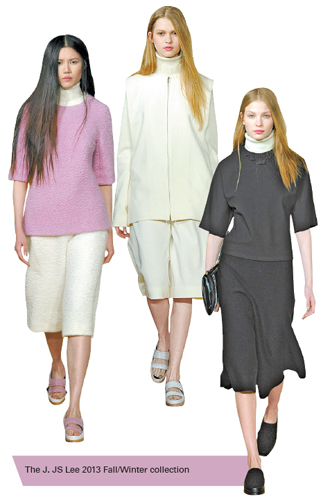 On her way up, life wasn’t always like it was now. Graduating from college in Korea back in 1996, the labor market at home was soon embroiled in the Asian financial crisis, which meant jobs in fashion were hard to come by.

Companies would hire modelesque designers so they could multitask at both designing and fitting models. But Lee is of average height, which made her too short for many of those positions.

It did not help that she went to college in the countryside, where universities get little respect.

So she approached the industry in a different way, applying for a job at the textile company QUA.

She worked hard at QUA, putting up with cutting remarks like, “What’s the point of training you? You’re just going to get married,” as she worked on skirts, pants, shirts and jackets. She did her rounds, working for Codes Combine and Jack and Jill for half a decade before reaching the end of her rope.

“I was getting paid far less than the designers I studied with,” said Lee. “But most of all I couldn’t stand the fact that designers and textile companies were calling all the shots.”

So she entered a pattern competition and won. Her prize was a 15-week pattern program in Central Saint Martins College of Arts and Design. Life was never the same again.

Toward the end of her course, the school helped her look for a job. After a three-month placement, the company she was working for offered to sponsor her visa, so she stayed on for another two years. During this time, her love of design took over once more, and she enrolled in a postgraduate pattern course at Central Saint Martins.

But it wasn’t so easy going back to school. Her experience in textile was working against her. Her professor yelled at her for designing in a commercial way and said, “If I catch you designing on paper, you’re out.”

Eventually, Lee found her niche in simple silhouettes and details. But all of the late nights took a toll on the budding designer. Leading up to her graduation show, she was hospitalized with ulcerative colitis (a form of inflammatory bowel disease).

While in the hospital, Lee was surprised by the support she received from her peers and even her prickly professor, so she decided to stick things out. Despite her health, she decided to stay in London and finish up.

“If it wasn’t for that finale showing, I wouldn’t be where I’m today,” she says.

She recalls applying for jobs at various fashion labels and making the final rounds at Stella McCartney and Celine, but her professor told her to decline the offers. “They said you should make your own clothes,” says Lee, who was dumbfounded to learn that her two mentors actually called the companies on her behalf to tell them that she would not be accepting.

When you encounter Lee’s collection, you wonder how she made a name for herself in London. Contrary to the shocking and experimental style that is quintessentially British fashion, Lee’s designs are clean and simple.

Because silhouettes are the main attraction of her pieces, a little wayward stitching here and there can ruin an outfit. To combat this, Lee makes all of her pieces by hand at her studio.

“The seams on the inside matter as much, if not more, as the outside,” she says of her decision to not outsource. Thus she says that her collection is “practically couture.”

Because of the labor that’s required, each season Lee can’t make more than 500 pieces. But the real test for Lee is being labeled a “minimalist.” When people hear the word, they picture brands like Celine or Jil Sander - heady competition.

“It’s not a matter of being Jil Sander or Celine,” says Lee. “People think that simple outfits, the use of white and black, are minimalist designs.” But Lee says she’s working hard to show people the difference.

Her niche is to combine old methods with the new. For example, instead of stitching on a collar, she’d rather emboss the area to give the effect. “People think this is minimalism, but it’s actually different,” Lee explains. She says that her work, with an emphasis on the fabric, is more “cleanism.”

In her fourth year as a full-fledged designer, her goal is not so different from other Korean designers.

China has Anna Sui, and Singapore has Jimmy Choo. Lee regrets that there isn’t a Korean equivalent. When you ask her where she’d like to be 10 years from now, she says she’d “like to survive.”

Just as fellow Koreans Woo Young-mi and Jung Wook-jun are slowly but surely making a name for themselves in Paris and around Europe, Lee says she’ll keep trying to make progress.

“I can’t guarantee what the outcome will be, but I guess that’s why you keep going,” she says. “So long as I feel that I’ve established something, I’ll continue at it. Celine and Jil Sander weren’t household names from day one.”