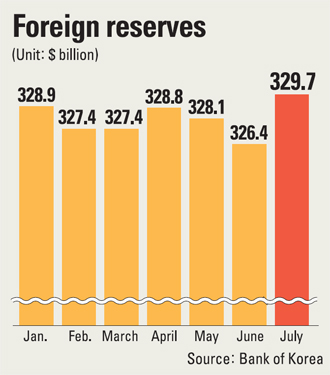 The increase appeared to support traders’ suspicions of dollar-buying intervention by the currency authorities.

According to the Bank of Korea yesterday, the nation’s reserves were $329.7 billion at the end of July. This was a turnaround from the last two months when the reserves shrunk.

The previous all-time record was set in January when reserves stood at $328.9 billion.

The central bank attributed the rise to investment management and the appreciation of the euro in July. The BOK said the value of the euro went up 1.8 percent against the dollar last month.

Earlier, traders speculated that the currency authorities purchased dollars in an effort to reduce fluctuations in the foreign exchange market, although the central bank has never disclosed or confirmed details of its actions.

Although the debate continues over whether it’s effective to increase the foreign reserves - it is costly and the central bank could suffer losses in managing them - analysts say at least the country is better prepared in case foreign investors leave the market once the U.S. reduces or ends its stimulus program.

Currently, securities account for 91.4 percent of the reserves, or $301.3 billion, followed by deposits denominated in foreign currencies (5.3 percent or $17.6 billion) and gold bullion (1.5 percent or $4.8 billion).