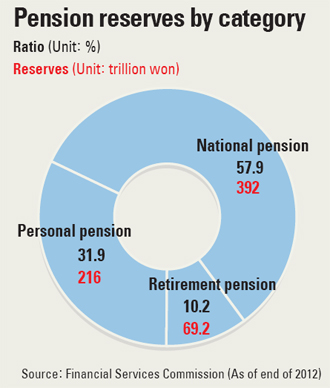 As part of efforts to boost sales of personal pension services, the government said yesterday consumers will be offered a wider range of savings products to plan for their later years.

“We are now living in a rapidly aging society and subscribing to a pension service has become more important to be able to live in a stable financial environment in old age,” said Park Jung-hoon, a director at the Financial Services Commission. “In Korea, there are public [national] pensions and also retirement pensions, but what we thought was that it is important for individuals also to personally prepare for their declining years by subscribing to private pension services.”

Based on financial law, an individual who has contributed a specified amount of money depending on the product for more than five years is able to receive monthly pensions for at least 15 years starting at the age of 55. The maximum an individual is allowed to contribute is 18 million won ($16,164) per year.

Though subscribing to a personal pension service is considered necessary to plan for longer lives, the percentage of individuals subscribed to the service is small compared to other developed countries. According to the Organization of Economic Cooperation and Development, only 12.2 percent of the Korean population was subscribed to a private pension service as of 2011, compared to 29.9 percent in Germany and 24.7 percent in the United States.

FSC data also showed that of the total amount of pension reserves in Korea in late 2012, only 31.9 percent were private, whereas 57.9 percent was the national pension service. While the national pension is distributed by the National Pension Fund, personal pension savings are paid out by financial institutions such as life and general insurance companies, banks and securities firms that sell pension products.

According to the regulator’s plan, starting next year, consumers will be offered private pension products in which they’re able to take out a portion of their accumulated savings in advance for urgent medical treatment while at the same time receiving monthly pension payments.

Also, the FSC said yesterday it would allow the establishment of life insurance companies dedicated solely to selling private pension services online. The commission fee paid by an individual who subscribes to an online pension product will be 50 percent less compared to offline products by 2015.

“Though we have planned out overall measures to have more people subscribe to personal pension services, details need to be discussed with related ministries like the strategy and finance ministry and health and welfare ministry,” Park said.