Woods picks up 8th title at Bridgestone, PGA next

Woods picks up 8th title at Bridgestone, PGA next 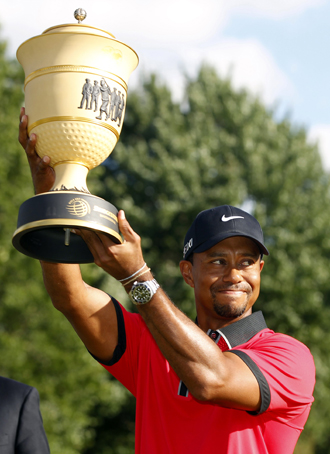 Tiger Woods played safe and smart with a big lead and coasted to a seven-shot victory at the Bridgestone Invitational on Sunday. [REUTERS/NEWS1]

AKRON, Ohio - They say par is a good score in a major.

If that’s true next week at the PGA Championship, then Tiger Woods has already done his share of preparation.

Woods played safe and smart with a big lead, parring 16 holes in an even-par 70 Sunday to coast to a seven-shot victory at the Bridgestone Invitational for his eighth win at the event ? matching the PGA Tour record he already shared for victories in a single tournament.

“As blustery as it was, it was going to be really hard for someone to shoot 62 or 63,” Woods said. “If I didn’t give any shots away and played my game and shot even par or better, I’d force these guys to go and shoot something super low on a golf course that wasn’t going to give it up under these conditions.”

As he walked to the scorer’s trailer to finalize his score, he scooped up his 4-year-old son, Charlie, who hugged him tightly as his father strode past the large gallery wildly cheering his landslide victory.

“This is the first win he’s ever been at,” Woods said. “That’s what makes it special for both of us.”

Daughter Sam was on hand when Woods won the U.S. Open in 2008, before his personal life imploded. Now, Charlie will have some memories of dad in the winner’s circle.

“They always say, ‘Daddy, when are you going to win the tournament?’ It was a few years there, or a couple years, I hadn’t won anything,” Woods said, smiling. “‘Are you leading or not? That’s a stock question. ‘Not leading.’ ‘Well, are you going to start leading?’ ‘Well, I’m trying.’ ”

After a second-round 61 in which he flirted with 59, Woods ended up at 15-under 265 to easily beat defending champ Keegan Bradley and Henrik Stenson.

For those betting Woods won’t win next week at Oak Hill, keep in mind that he has already won the Bridgestone and the PGA Championship in the same year three times in his career (2000, 2006, 2007).