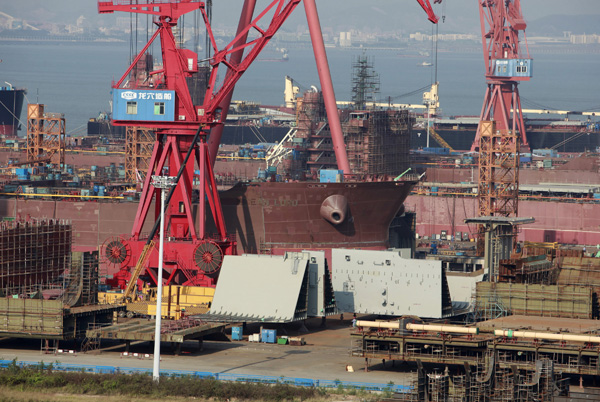 Ship owners placing orders for China-made vessels, engines and axles should get better funding and some key companies will be allowed to issue corporate bonds, the State Council said in a statement yesterday. Chinese shipbuilders don’t have strong innovation, while overcapacity persists, said the statement dated July 31.

China may have a third of its more than 1,600 yards shut down in about five years, according to Wang Jinlian, head of the industry association. The sector is among those - including iron and steel, cement, electrolytic aluminum and flat glass - that must accelerate the phasing out of overcapacity, according to the Ministry of Industry and Information Technology.

“It seems as if the government wants to soothe the sector by issuing the support plan as it can’t afford to see social unrest caused by large-scale bankruptcies or job cuts,” said Lawrence Li, a Shanghai-based analyst at UOB-Kay Hian Holdings. “However, the government didn’t explicitly say how it would help the shipbuilders and what kind of yards are key.”

China Rongsheng Heavy Industries Group Holdings Ltd., the largest shipbuilder outside state control by order book, reported last month it had a net loss in the first half and said it was seeking financial support from the government and shareholders after a plunge in orders strained cash flow. The company has also agreed to issue convertible bonds to raise a net $178 million for working capital and to support the development of its offshore engineering business.

Companies should be confident as “the potential in the domestic market remains relatively large,” according to the statement. Besides restricting new shipbuilding capacity, the government is encouraging mergers and acquisitions and pooling of resources in the industry, the statement said.

Thirty-eight percent of yards in China didn’t get contracts for new vessels last year, and 10 percent had no deliveries scheduled beyond the end of that year, the London-based ship-brokering unit of ICAP said in a report sent by e-mail on Dec. 24.

The government also pledged to study securitization of shipbuilders’ loans, according to the statement.

In the plan, the Chinese authorities said they will encourage the development of offshore engineering equipment such as drilling platforms and large LNG ships.

The global onshore and offshore plant construction market is expected to rise to $1.26 trillion in 2017 from $989 billion in 2012, according to South Korea’s Ministry of Knowledge. The offshore oil and gas market may account for 26 percent of that, the ministry said in a Jan. 7 statement.

Earlier-than-scheduled scrapping of older ships is another part of the plan, according to the statement, while it urged more military-civilian cooperation in design and development.

Local authorities and agencies should formulate supporting policies and ensure the timely completion of targets, the statement said, without providing specific goals.

Under the government’s current five-year economic plan that runs through 2015, targets for the sector include upgrading shipbuilding standards and developing higher value-added products.

Combined profits of 80 major shipbuilders monitored by the Chinese Association of the National Shipbuilding Industry fell 54 percent in the first half to 3.58 billion yuan ($584 million), China Daily reported July 24.

About 464 shipyards in China won 18.7 million dead-weight tons of orders worth $14.3 billion last year, the lowest since 2004, according to Clarkson Plc, the world’s biggest ship broker. That compares with contracts for 14.6 million tons worth $29.6 billion received by 88 yards in Korea, the world’s second-biggest shipbuilding nation. Bloomberg