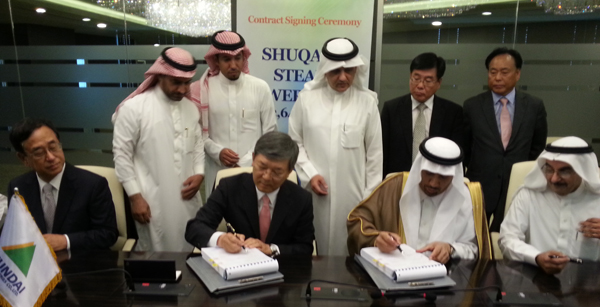 The company said it held a contract signing ceremony in Riyadh on Sunday, local time, for construction of a 2,640-megawatt steam power plant in Shuqaiq, 135 kilometers (84 miles) north of Jizan in the southwest part of the country.

The power plant is scheduled to be finished by 2017.

HHI is currently building three power plants in Saudi Arabia. It completed the world’s largest desalination power plant (2,750 megawatts) ordered by the state-run public utility company Marafiq last year. In Riyadh, the company is building a 1,750-megawatt thermal power plant with a goal of finishing by the year’s end.

It also has embarked on the construction of a thermal power plant in Jeddah, an order placed by SEC last year. With the Shuqaiq plant completed, HHI will be responsible for 20 percent, or 12,000 megawatts, of Saudi Arabia’s total power capacity.

HHI competed against 10 top plant builders since November to secure the order. It was chosen as a preferential bidder in May.

“We were able to win the deal less than a year after the company received a $3.2 billion thermal power plant contract from SEC, which suggests the client has deep trust in our technological prowess and ability to execute the project,” the company said in a press release. 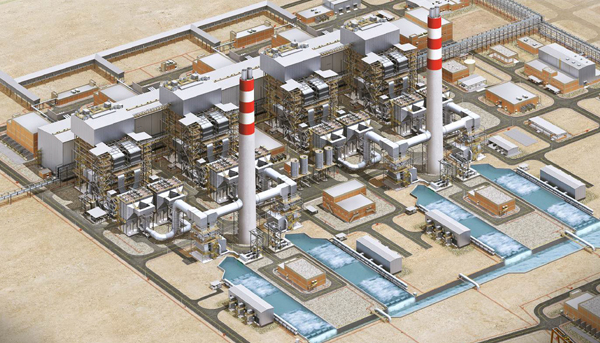 Bird’s-eye view shows a 2,640-megawatt steam power plant being built in Shuqaiq. Provided by the company

Giving such large plant projects consecutively to one company is considered unprecedented in the industry, the release said.

“Despite the ongoing economic slowdown, the Middle East region has a growing market as investors are willing to participate in Arab countries’ infrastructure development, needed for increasing population and economic growth,” said Cheon In-soo, head of the company’s plant business. “Since the Saudi government is pushing for development of additional power and desalination plants, we expect more orders to come.”

The industrial plant construction division, combining the offshore and onshore units, is the company’s second largest business after the shipbuilding unit, accounting for about 25 percent of total annual sales.

With the current recession in the global shipbuilding industry, HHI has been trying to enhance the competitiveness of its plant division, which has achieved a remarkable record.

While the shipbuilding unit won a total of $6.15 billion in orders last year, the plant unit beat the main unit by achieving $8.65 billion worth of orders.