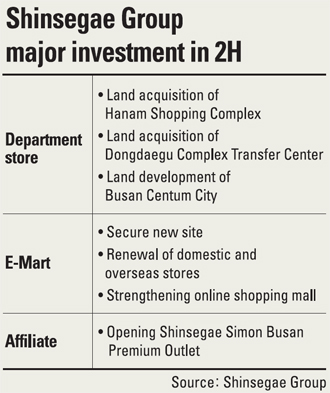 Shinsegae Group plans to invest a record 2.5 trillion won ($2.2 billion) and hire 7,000 full-time and part-time regular employees during the second half of the year.

The group said yesterday it decided to increase its 2013 investment by 500 billion won over the original budgeted amount at its second-half strategy meeting. The company allocated 2.2 trillion won last year.

Shinsegae spent 1.5 trillion won on investments in the first half of the year and had a work force of 17,000. It will recruit an additional 7,000 full-time employees and part-time regular employees in the second half.

“We plan to secure new growth engines through ongoing investment and boost the domestic economy in the second half. We confirmed the management plan in line with such goals,” said a spokesman for Shinsegae Group. “Although the overall retail industry is experiencing poor performance due to difficulties in the internal and external business environments, we are expanding jobs through active investment in order to do our part for the revival of the domestic economy.”

For the remainder of the year, Shinsegae Department Store will invest in developing land at Busan Centum City and is acquiring property for Dongdaegu Complex Transfer Center and the Hanam Shopping Complex

Its discount store arm E-Mart will focus on renovation of stores nationwide and abroad, securing property for new stores and strengthening its online shopping mall.

However, in E-Mart’s case, due to the government’s restriction on large discount chains opening new stores, the investment may decrease.

The group’s affiliate Shinsegae Simon is opening its Busan Premium Outlet. It signed a memorandum of understanding with Busan Bank yesterday, according to a statement.

In addition, the 24,000 people expected to be employed by the end of the year include 11,000 sales staff who were converted from temporary workers to full-time employees at E-Mart and Shinsegae Department Store in April and May.

“Because we saw increased efficiency after converting temporary employees to regular employees, we plan to steadily increase the number of full-time workers in the second half,” said a group spokesman.