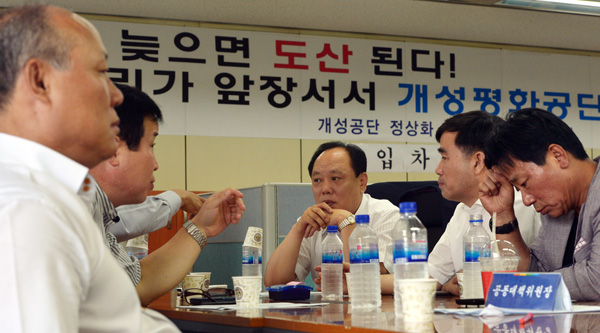 Businessmen who run factories in the Kaesong Industrial Complex meet in Seoul yesterday to discuss what to do as Seoul seems to be getting closer to making its threatened “grave decision” on the inter-Korean project. [NEWSIS]

With over a week of conspicuous silence from Pyongyang after Seoul’s proposal of “final talks” on reopening the Kaesong Industrial Complex, South Korea is “losing patience,” according to the Unification Ministry on Sunday.

The joint factory has been shuttered for over four months now, and concerns are growing in the South that the eight-year-old complex and last remaining symbol of the reconciliatory Sunshine Policy days will soon be shut down for good.

“It seems like North Korea is dragging things out in order to make the South run out of patience and announce the closure of the complex first,” An Chan-il, a defector-turned-analyst at the World Institute for North Korean Studies, told Korea JoongAng Daily by phone. “If South Korea decides on the shutdown, the North could put all the burden of responsibility on the South, blaming it for the closure in front of the international community.”

In the event that the North refused the offer or didn’t respond, he warned that South Korea would be forced to make “a grave decision,” which has been generally understood to mean permanently closing the park.

“Basically, in order for the complex to be constructively normalized, we urged North Korea for an assurance that it would never make unilateral moves like those of March and April,” Kim Hyung-suk, the Unification Ministry spokesman, said at a briefing yesterday.

In March, North Korea cut off all military communication channels with the South. In April, it barred all Southern workers and cargo from entering Kaesong and pulled its 53,000 workers from the complex.

On Friday, Minister Ryoo told a group of opposition Democratic Party lawmakers that the fundamental reason for the failure of the talks thus far was not the wording of draft bilateral agreements, but the attitude of the North Korean negotiators, which Ryoo concluded was not sincere.

“I didn’t sense any assurances from North Korea that they would never carry out such action again,” Ryoo said, according to the Unification Ministry.

As North Korea has always protested the exercise, relations between the two Koreas are expected to freeze up as it approaches.

“There is a possibility that North Korea will say something ahead of the UFG exercises, as the UN headquarters will give the regime advance notice,” Yang Moo-jin, a professor at the University of North Korean Studies, told the Korea JoongAng Daily by phone. “But if they still resist the next round of dialogue, the Kaesong complex will likely get closed down permanently.”

Pyongyang has blamed the shutdown on joint South Korea-U.S. military drills in March. It also took offense to a South Korean media report that speculated the North would never shut down the complex as it is a source of much-needed hard currency for the reclusive state.

In the meantime, Seoul pointed the finger of blame right back at the North, insisting that it take responsibility for the disruption and promise that a similar closure will never reoccur.

Seoul is preparing to offer compensation to 109 out of the 123 South Korean companies based in Kaesong this week. Taxpayers would foot the total bill of about 280 billion won ($251 million). Compensated companies would then hand the rights to dispose of their assets in the complex over to the South Korean government.

When asked if by offering such compensation the government is already preparing for a shutdown, Unification Ministry spokesperson Kim refused to respond.

“As part of its ‘grave decision,’ the government will distribute the compensation, and then cut off the electricity being supplied to the Kaesong area soon,” said Professor Yang. “The closure of the Kaesong complex would also have a serious impact on the Park Geun-hye administration’s so-called ‘trustpolitik.’”