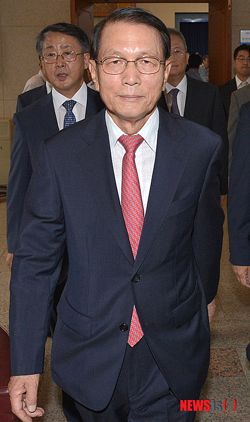 President Park Geun-hye today replaced several senior aides at the Blue House, appointing Kim Ki-choon, a former lawmaker with lengthy experience in the prosecution, as her new chief of staff.

Kim is a 73-year-old former justice minister and former prosecutor-general who also served three terms as a ruling party lawmaker.

The president also appointed veteran diplomat Park Joon-woo as her new senior political affairs secretary. The post has been vacant for about two months after Lee Jung-hyun became senior secretary for public relations.

Selecting a diplomat as senior political secretary, not a politician, was an unusual choice.

Hong Kyung-shik, a retired prosecutor with two decades of experience, was named the new senior secretary for civil affairs.

Yoon Chang-bun, an information and communication specialist who is a former chairman of Hanaro Telecom, was appointed senior secretary for future strategy.