Spy chief is contrite but elusive at Assembly

Spy chief is contrite but elusive at Assembly 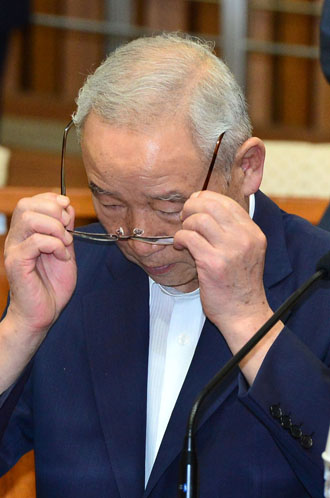 Nam Jae-joon, chief of the National Intelligence Service, adjusts his glasses yesterday at a hearing in the National Assembly investigation of the agency’s conduct in the presidential election campaign last year. [NEWSIS]

The current head of the national spy agency apologized to the public for the scandal over whether it interfered in last December’s presidential campaign.

But he denied that the NIS tried to help President Park Geun-hye win over challenger Moon Jae-in and said it was just doing its job protecting the country against North Korea.

“Setting aside the controversies over what the truth is in regards to the presidential election, I feel regretful for causing public concerns,” Nam Jae-joon, the chief of the National Intelligence Service, said yesterday in opening remarks at a hearing in the National Assembly investigation of the agency’s conduct in the campaign.

The prosecution concluded that Won ordered some NIS workers to post comments to harm the reputation of Moon and bolster support for then-ruling party candidate Park.

Along with Won, former Seoul police chief Kim Yong-pan has been indicted for allegedly covering up the case.

“The NIS has made desperate efforts to safeguard national security and the national interest,” Nam said. “But we can’t describe everything we do to the public, which frequently caused suspicions of us.

“This case was part of our psychological warfare against North Korea,” Nam said. “I ask lawmakers to make this legislative investigation an opportunity to clear up all misunderstandings about our anti-North Korean warfare.”

According to an NIS statement released in March, North Korea attempted to cause social turmoil and raise anti-government sentiment by posting comments criticizing the previous administration.

Opposition politicians sneered at that explanation, saying the spy agency labeled all criticism against the government as being by “pro-North Korea people.”

While denying a deliberate campaign to affect the election results, Nam pledged to reform the spy agency.

“Under the current administration, the NIS is stepping up efforts for internal reform by restructuring and adopting a new system of human resources,” he said.

“The DP should apologize for condemning the anti-Pyongyang tactics of the NIS, which is a core duty of the NIS,” Representative Kweon Seong-dong said.

“Last year’s election was an illegal election in which the NIS intentionally became involved,” said Representative Jung Chung-rae of the DP.

“Everything has become clear about the charges against former NIS chief Won Sei-hoon and former Seoul Police Chief Kim Yong-pan through the investigation by the prosecution. President Park Geun-hye should take responsibility for this.”

The hearing was open to the media for about 10 minutes only during which Nam and several lawmakers made their opening comments.

The ruling and opposition lawmakers were supposed to start the hearing at 10 a.m., but the DP members demanded a live broadcast by three local major broadcasters, delaying the hearing to 2 p.m.

DP lawmakers argued that the three broadcasters had promised to air it live but suddenly changed their minds, which the opposition suspected was a political ploy by the Saenuri Party.