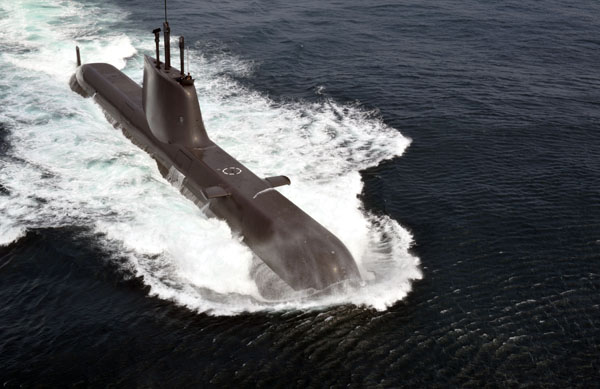 The South Korean Navy unveiled its flagship 1,800-ton submarine, the An Jung Geun, on Sunday. Provided by the Navy

For the first time, the South Korean Navy has revealed the interior of its flagship 1,800-ton submarine, the An Jung Geun, to the media. The An Jung Geun reportedly can stay submerged for two weeks at a time and is adept at antisubmarine warfare.

At 65.3 meters long and 6.3 meters wide, the sub is named after An Jung-geun (1879-1910), a renowned independence fighter during the Japanese colonial period who assassinated Resident-General of Korea and former Japanese Prime Minister Ito Hirobumi in 1909, in retaliation for Japan’s takeover of Korea.

The South Korean submarine fleet is a mere one-seventh the size of North Korea’s, with some 10 vessels. But plans are in the works to double that with locally built 3,000-ton subs by 2020, as well as to create a submarine command by 2015.

The vessel’s captain, Hyun Chang-hoon, said, “The Navy’s submarines play a vital role in controlling North Korea’s provocations in the seas and protecting our nation in the deepest of our waters.”

With the nickname “Covert Assassin,” the diesel-electric powered attack submarine has an air-independent propulsion (AIP) system that enables it to remain underwater for longer than conventional submarines without access to atmospheric oxygen.

The Navy acquired the submarine in 2009 and deployed it in 2010. It is the third of its kind, but this is the first time the interior has been revealed to the public. It was built by Hyundai Heavy Industries and designed by German shipbuilder Howaldtswerke-Deutsche Werft.

Reporters were able to see the submarine in action in waters off Jinhae in South Gyeongsang last week. It can disappear under water in a matter of seconds, dive up to 400 meters and launch stealth attacks, detecting approaching enemy craft and torpedoing them.

The An Jung Geun is a Type 214 sub that can hold up to 40 people, with a maximum submerged speed of 20 knots.

Though somewhat cramped, it has sleeping quarters, a small cafeteria and kitchen, and a lounge area. It’s also equipped with torpedoes and submarine-to-surface missiles, as well as an advanced sonar system.

The Navy has two other 214-class ships, the Sohn Won Il and Chung Ji.

North Korea has used subs to cause provocations against the South at least seven times since the 1980s.

In March 2010, the South Korean warship Cheonan was sunk by a torpedo in a submarine attack by the North that killed 46 sailors.