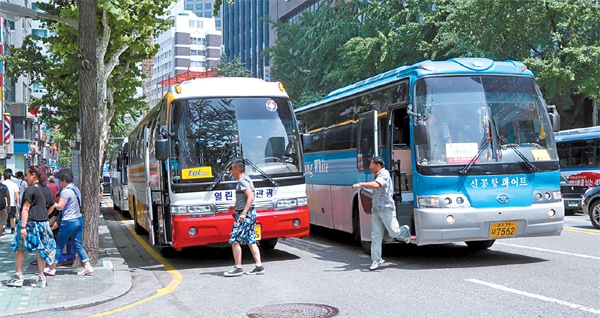 Tour buses unload tourists in a roadway in Seosomun-dong, central Seoul. They stayed there until the passengers finished their meals, occupying a lane. By Ahn Seong-sik

On a busy roadway in the heart of Seoul, a line of six tourist buses occupies a lane during rush hour. The road is near a samgyetang (chicken soup) restaurant popular with visitors from China and Southeast Asia. The buses unload their passengers and wait until they finish their meal and do a bit of shopping, which often takes over an hour.

The drivers are unfazed when parking officials dispatched by the local government order them to move their buses. Meanwhile, traffic blocked by the buses is forced to merge, turning the already congested street into a melee of honking horns.

“The police officers would immediately issue warnings to taxi drivers if they parked in a roadway for just a few minutes,” said Lee In-yi, a 64-year-old cab driver who was stuck behind the blockage.

“But big traveling buses often stay on the road for an hour while foreign tourists go eat, and the police tend to turn a blind eye,” he complained.

The problem is widespread across Seoul as its popularity as a tourist destination rises, causing gridlock in busy areas especially around meal times.

But being on a tour route is a huge boon for restaurants, and the money the tourists bring in far outweighs the threat posed by traffic fines.

“It doesn’t matter how heavy a fine we impose on them because the restaurant owners pay the fines for the bus companies,” said one parking officer.

An average of about 600 large tour buses operate in the capital every day, but the city only has the parking lots for about 300. Some said the city government, which is trying to attract as many international tourists as possible, doesn’t actively crack down on illegal parking by such vehicles.

The Seoul Metropolitan Government only wrote 737 tour buses up for parking illegally between January and September last year - less than two days worth of tour bus traffic.

“If the tour buses seriously hampered the traffic we would do more, but that’s not currently the case,” the official said. “And we also need to take into account the boosting of tourism,” he added.

Instead, the Seoul government is opting to increase the parking capacity.

“We need to discuss how to accommodate the large buses rather than just regulating them,” said Seoul Mayor Park Won-soon during an open discussion session held last year.

Spaces in a public parking lot reserved for tour buses will be increased to 37 from the current 25 by 2020.

But some experts say stronger regulation is needed as well as more parking spots.

“Relevant regulations should be created along with the building of public parking lots so that they can be effectively operated,” said Kang Seung-pil, a construction engineering professor at Seoul National University.