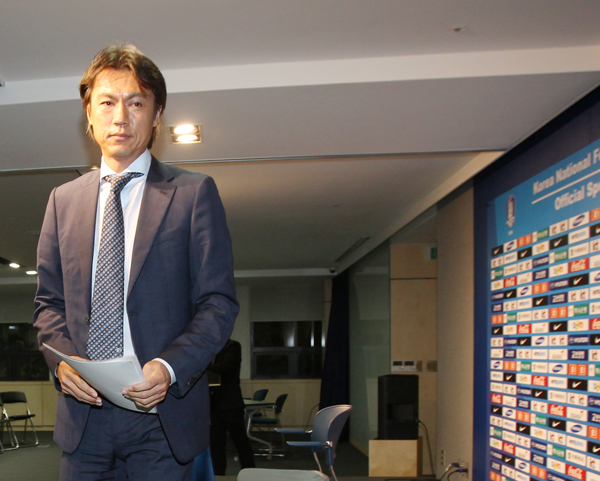 Korean national football coach Hong Myung-bo is calling up six new players for a friendly match against Peru in Suwon on Aug. 14. By Kim Jin-kyung

Korea’s towering striker Kim Shin-wook was left off a second Hong Myung-bo squad for a friendly match with Peru next week, as the new coach is groping for new ways to sharpen Korea’s offense.

The Korea Football Association yesterday announced the 20-member roster for the Aug. 14 tune-up match in Suwon, which kept 14 of the 23 players Hong called up for the East Asian Cup last month.

Kim, 25, was not among them, the first time the 1.96-meter-tall forward lost a spot on the national team in 18 months. He missed a buildup match with Uzbekistan and a World Cup qualifier against Kuwait, both in February 2012.

Korea had a mediocre third-place finish under Hong in his debut as national coach at the East Asian Cup, a four-nation tournament in which Kim’s presence posed a dilemma as his formidable height impeded Korea’s creativity by making his teammates overly dependent on his headers.

“Kim Shin-wook showed a good performance during the World Cup qualifying games and the K-League Classic, but, we had a problem of monotonous play [when he was on the team],” Hong said. Kim scored 12 goals in this season’s K-League Classic, trailing only Pedro of Jeju United, who netted 14 goals. 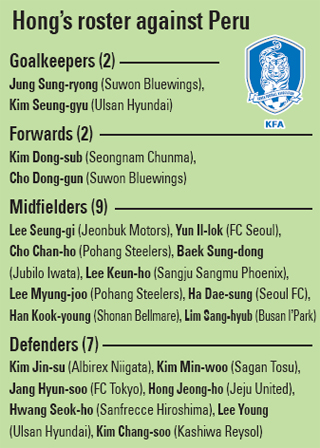 “I thought it was a critical error to let the opponents know what our strategy would be even before the game starts.

“We have sufficiently verified Kim Shin-wook’s ability. It is important to make good use of a player’s merits, but I felt the necessity of developing new offense patterns,” Hong said.

Korea showed its age-old lack of a finishing touch at the East Asian Cup, scoring only one goal in three games. Another forward who played in the Cup, Seo Dong-hyun, was also dropped from the roster, leaving Kim Dong-sub as the only striker. Suwon Bluewings forward Cho Dong-gun made Hong’s squad for the first time.

Hong said that he will stick to a sole striker system for the time being. “Basically, I am focusing on employing a top [striker] on offense,” Hong said. “I will try to complete an existing system by way of shadow strikers and offense resources who can cover a wide range of wing sides.”

Lim Sang-hyub, a Busan I’Park midfielder, joined the national team for the first time, and so did midfielders Kim Seung-gyu and Baek Sung-dong.

Once again, Hong did not call up veteran striker Lee Dong-gook, whose maverick performance on the Choi Kang-hee squad stirred up a controversy. Hong said that he wanted to give the 34-year-old forward more time to adjust to the domestic league.

No European-based players were called up against Peru, but Hong said that he is planning to summon them beginning next month.

Hong hinted that he will continue his experiments. “I will not cling to a win or a loss and will continue to discern gems from pebbles,” Hong said. “I wish my first win as national manager would come at our first match at the [Brazil] World Cup.”