Park ready to start fresh after loss at British Open

Park ready to start fresh after loss at British Open 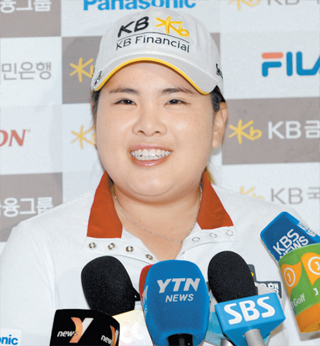 Park In-bee, who finished tied for 42nd at the British Open, still has a chance to win her fourth major this year at the Evian Championship. [NEWS1]

Park returned to Korea yesterday from Scotland, where she carded a six over 294, finishing tied for 42nd with four others, including Korea-born Australian Lydia Ko. That foiled the 25-year-old Korean’s ambitious bid to become the first golfer, male or female, to win four straight majors in a single season.

“I have a regret that it could have been better, but I learnt a great deal at the event, so I think it was successful,” Park said at Incheon International Airport. “I will start afresh.”

Park, who displayed a remarkable consistency while bagging six victories this season, appeared to have lost her composure at St. Andrews, falling from a 3-under in the first round to a 1-over in second, a 2-over in the third and a 6-over in the final.

“You need to adapt to the greens on such a difficult course as St. Andrews, and I could not do it as I was more mindful of wind and other external factors,” Park said. Her strength in putting also was not her best, she said.

“I was told that in particular Korean players rooted for me,” said Park, whose amicable personality has made her few enemies. “I enjoyed dominant support and cheers and still couldn’t make it happen. That makes me sorry.”

Park could still win four majors in a year, which Korean media outlets say constitutes a calendar Grand Slam. The Evian Championship, which was promoted as the LPGA Tour’s fifth major this season, will open on Sept. 12. That will also give Park a chance to defend her title.

“I am confident there because I know the course well and had a good result,” Park said. “In particular, the experiences that I earned at the Women’s British Open will be helpful, I think.”

During a five-day stay in Korea before the British Open, Park said that her initial goal for the season was winning the Player of the Year award. She said that she will return to that goal.

She remained atop the Rolex Player of the Year rankings for the 17th straight week, but her lead was cut short after runner-up Stacy Lewis of the U.S. won the British Open. Park has earned 281 points, 120 points ahead of Lewis.