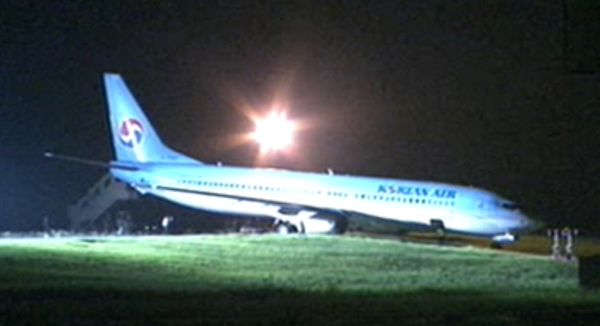 The Ministry of Land, Infrastructure and Transport said yesterday it will conduct a special investigation into why a Korean Air Lines jet overshot the runway while landing at Niigata International Airport in Japan, Monday night.

According to the ministry and the company, KAL’s flight #763, which departed from Incheon International Airport at 6 p.m. Monday, overran the runway by about 15 meters while landing in Niigata at 7:41 p.m. No one was injured. The nation’s flag carrier said 106 passengers and nine crew were on board and all the passengers were safely transported to the arrival gate on buses.

KAL, an affiliate of Hanjin Group, said the Boeing 737-900 successfully touched down but the front landing gear of the plane ended up on the grass beyond the end of the runway.

“The accident seemed to happen after the plane failed to reduce its speed, but the company is trying its best to figure out the exact cause,” an official from KAL said. “We can’t judge at this moment whether the accident was caused by a mechanical or pilot error.”

Korea’s transport ministry said that although no one was injured and no damage was done to the aircraft, it will investigate to find out if the aircraft was properly maintained and the pilots followed standard procedures.

Korea’s aviation safety standards have earned top scores from International Civil Aviation Organization, a United Nations agency specializing in aviation, but it reputation has been tarnished by recent accidents.

To improve its systems, the ministry has been operating an aviation safety committee from July 31. The 46-member committee includes not only government officials but experts from various sectors such as psychology professors and civic group leaders.