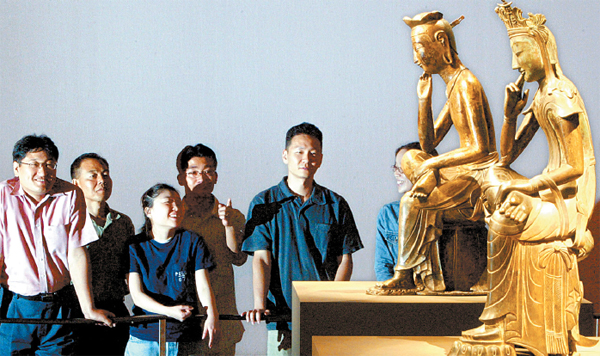 With an indescribably peaceful face and mysterious smiling lips, many art historians have picked the seventh-century gilt-bronze Maitreya in Meditation, National Treasure No. 83, as one of the greatest masterpieces of all Korean relics.

So it is no surprise that when the Metropolitan Museum of Art in New York decided to put together its first large-scale exhibition on the Silla era (57 B.C.-A.D. 935), this treasure was high on the museum’s list. “Silla: Korea’s Golden Kingdom,” an exhibition of some 100 objects from the Silla era, is scheduled to run at the Met during its busy season, Nov. 4 to Feb. 23.

But a controversial decision by the new head of the Cultural Heritage Administration of Korea to stop the famous statue from traveling to New York, along with two other ancient artifacts, could put the entire exhibition in jeopardy. 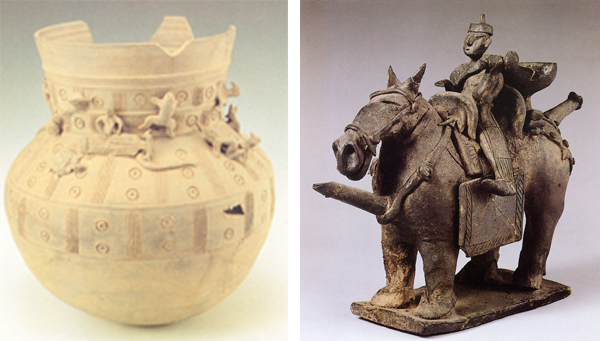 The National Museum of Korea and the Met are saying that the pensive Bodhisattva statue is a key part of the exhibition and needs to be present. However, Byun believes the statue has already traveled too much, having spent two years and four months abroad in eight exhibitions over the past 50 years, and it is necessary to limit the precious artifact’s travel. 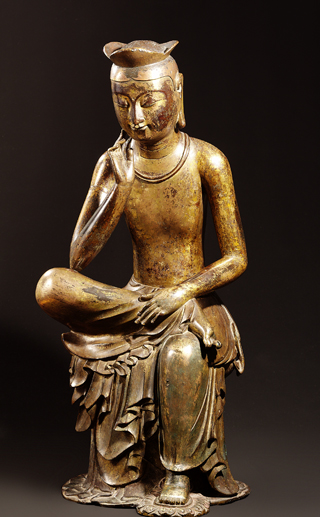 But of the lot, many say National Treasure No. 83 is the most important masterpiece. Measuring 93.5 centimeters (just over 3 feet) tall, it was found in Gyeongju, North Gyeongsang in the 1920s. It is believed to have been made in the seventh century, in the late part of Korea’s Three Kingdoms era (57 B.C.-A.D. 668).

“The pensive Bodhisattva statue style originates from India,” wrote Lee Bae-yong, former president of Ewha Womans University and a professor of Korean history, in a recent column in the JoongAng Ilbo. “It portrays Buddha Shakyamuni while he was the young royal prince ‘Siddhartha,’ meditating on frailty of human life. In Korea, such statues were common between the sixth and seventh centuries when the Three Kingdoms were fighting for control of the entire Korean Peninsula.”

Lee said that the Bodhisattva of National Treasure No. 83 is special because it looks very realistic and vibrant, almost like it is alive. “The statue is in the apex in terms of historical, religious and artistic values. With its pensive posture and graceful, calm smile, it evokes such peace in the minds over viewers.”

Other art historians have nicknamed the statue “the smile of a thousand years.”

The National Museum of Korea recently estimated the statute to be worth 50 billion won ($44.5 million), the highest among all of Korea’s state-designated cultural properties. However, that value is just for insurance purposes, experts say, and its symbolic significance is much higher.

At the National Museum of Korea, the statue stands in the Buddhist Sculpture room on the third floor of the museum. The statue and another Bodhisattva in a pensive pose, National Treasure No. 78, usually take turns occupying this spot.

From top: The Metropolitan Museum of Art in New York; former President Kim Dae-jung (fourth from left) attending the opening of the Korean gallery at the Met in 1998; Thomas Campbell, director and CEO of the Met, meeting President Park Geun-hye in 2009. [JoongAng Ilbo]


Under the dim, yellow light, the Bodhisattva sits with its typically peaceful look, seeming indifferent to the ongoing controversy. The statue is exhibited on a slightly elevated podium, forcing visitors to look up at it. A constant stream of visitors examine the piece from the front, sides and back, many kneeling in front to look upward at the statue.

“It has a twin in Japan,” notes Lee Hyun-ju, a museum spokesperson, “a wooden one, which is one of Japan’s most treasured cultural properties. But the gilt-bronze one required much more skilled craftsmanship.”

But on April 11, they gave a “conditional approval” to the request. It was a yes with two conditions: That the museum will refrain from lending its cultural properties for a long period, and that the museum refrain from lending such a large volume of cultural properties at once. In other words, it could be the last yes to a request like this in a long time.

But the following month, Byun Young-sup - who took the helm of the Cultural Heritage Administration in March - expressed unhappiness with the committee’s decision at a meeting with journalists, noting that the pensive Bodhisattva, National Treasure No. 83, had been taken out of Korea eight times between 1957 and 2008. She said frequent travel raises concerns about damage and theft.

As an alternative, Byun suggested that the National Museum of Korea loan another gilt-bronze pensive Bodhisattva, National Treasure No. 78. Believed to be from the sixth century, this Maitreya is about 10 centimeters smaller than the No. 83, features more ornamental decorations and is considered to be more formalistic and less realistic.

Kim Young-na, director of the National Museum of Korea, reportedly balked at Byun’s suggestion, worrying that all the relics slated to be featured at the Met were “too small.” In an indication of the deepening row between the two, Byun told Kim that if size were her prime concern, she should “take Seokguram Grotto” (an eighth-century stone grotto in Gyeongju that contains a 3.5-meter-tall (11.5-foot) Buddha statue and numerous other artworks).

One expert who took part in the Committee for Cultural Heritage’s deliberations said “the members of the committee did raise concerns about state treasures being taken out of the country too often, but still we agreed to approve sending the statue considering the worldwide influence of the Met.”

Another expert said the members of the committee were “quite baffled at this unprecedented incident,” saying that “although procedurally there is nothing wrong with the Heritage Administration chief exercising her right to veto, if she makes all the decisions based on her own judgment, there is no reason to have such a committee in the first place.”

“We have previously sent abroad relics that are far bigger and far more vulnerable than the pensive Bodhisattva for exhibitions overseas,” said an official at the National Museum of Korea. “We do not understand the decision.”

Others in the industry also opposed Byun’s decision, saying that it is not unusual for a country to send dozens of state treasures to important exhibitions abroad - for example, the Met’s “Art of the Samurai” held in 2009 (with the help of Japan) and “The World of Kublai Khan” in 2010 (with the help of China).

Hwang Pyeong-wu, a civic activist in the area of cultural properties and the head of the Korea Cultural Heritage Policy Research Institute, says it is problematic how Korea thinks so easily of lending its national treasures to other countries.

“The pensive Bodhisattva, National Treasure No. 83, was taken out of the country eight times between 1957 and 2009, which amounts to 2,626 days,” he said, adding that countries like France, Japan and India are very cautious about their cultural properties.

He also asserts it is inappropriate for the National Museum of Korea to promise to send state-designated cultural properties to the Met without first getting approval by the Cultural Heritage Administration, which is in charge of overseeing the travel of state treasures.

Hwang adds that for such a precious relic like the Bodhisattva statue, the government should tell people to come to Korea if they want to see it.

But others say, while the preservation of cultural relics is important, sharing them with the world is equally important. They add that it is unrealistic to expect people to travel all the way to Korea just for this statue.

“Such masterpieces, of supreme artistic level and that can be appreciated by anyone around the world, must be shown around the world to let people know of Korea’s cultural essence,” said Oh Yeong-chan, a professor of ancient Korean history at Ewha Womans University.

Even Sheikha Hussah Sabah al-Salem al-Sabah, the director general of Kuwait’s DAI (Dar Al-Athar Al-Islammiyah) Islamic art museum, has entered the fray. At a meeting with Korean journalists on July 1, for the opening of the “Art from the Islamic Civilization” exhibition at the National Museum of Korea, the Kuwaiti princess said sharing a country’s history, culture and wisdom through relics helps the country’s culture grow in value and advised the Korean government to let the statue be shown at the Met.

Officials at the National Museum of Korea also stress that the Met opportunity is too good to miss. The exhibition period includes the busy Thanksgiving and Christmas holidays, and will take place in the high-profile first-floor special exhibition galleries. They also pointed out how the Korean galleries at the Met and other U.S. museums are far smaller and less popular compared to those in Japan or China.

On Aug. 1, Thomas P. Campbell, the director and CEO of the Metropolitan Museum of Art released a statement asking the Korean government to reconsider its decision.

“We are deeply disappointed by the decision of the Cultural Heritage Administration to deny the loans of three key objects to the forthcoming exhibition,” the one-page statement said, adding that the show was expected to be one of the most significant displays of Korean art at the Met in more than 40 years, capable of transforming people’s understanding of Korean culture.

“We developed this project in consultation with scholars on the Silla period and members of the Committee on Cultural Heritage,” said Campbell’s statement. “Each work of art in the show was chosen to tell a story and relate to others in a broader narrative, so the absence of the three objects will deeply affect the exhibition. It is particularly disappointing that the exhibition’s long-anticipated centerpiece, National Treasure [No.] 83, has now been declared unable to travel to New York.

“We are currently reviewing whether it is possible to proceed with the show without these objects and remain hopeful that this decision can be reconsidered and reversed.”

Korean media reports said that the Ministry of Culture, Sports and Tourism has asked the Cultural Heritage Administration to reconsider its decision.

“We understand the concerns of the ministry and others, but the decision was made in consideration of future preservation problems of state treasures,” a high-ranking Heritage Administration official told a Korean newspaper on Aug. 5. “Although it is a difficult issue, it is unlikely that the decision will be overturned.”

Culture Minister Yoo Jin-ryoung reportedly told journalists that the request for reconsideration wasn’t delivered “from a minister to a vice minister,” meaning Byun, “or from the culture ministry to an agency that operates under it.” He added that “although it would be welcome news if the Cultural Heritage Administration would reconsider it, I will also respect its decision even if it doesn’t.”