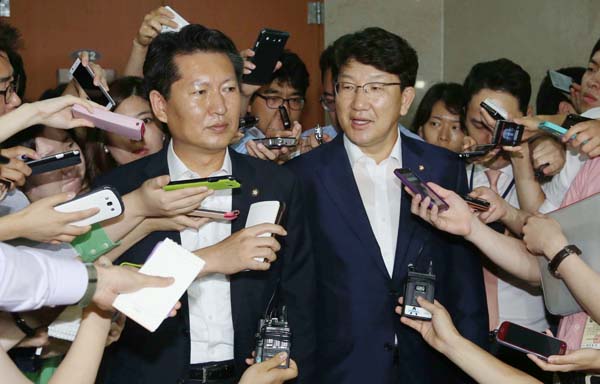 President Park Geun-hye yesterday proposed a political summit with the chairmen and floor leaders of the ruling and opposition parties to discuss the wide range of issues dividing them.

Kim said the meeting should include floor leaders since many issues involve the legislature.

“We would like to propose a five-way talk,” Kim said.

Representative Choi Kyung-hwan, one of Park’s closest associates, is the floor leader of the Saenuri Party. The DP floor leader is Representative Jun Byung-hun. Before making the offer, Kim made clear that the proposal was coming from Park.

But the Democratic Party yesterday rejected the five-way meeting offer, saying it wants to have a one-on-one meeting between Park and its Chairman Kim Han-gill. The Saenuri Party welcomed the proposal.

Park’s offer was in response to the recent requests made by the chairmen of the Saenuri and Democratic parties. DP Chairman Kim acted first on Saturday, asking Park for a one-on-one meeting to end months of political deadlock over the impasse involving the nation’s main spy agency.

The National Assembly is conducting an investigation into whether the National Intelligence Service ran an online smear campaign against the opposition candidate in last year’s presidential election, but the Democrats say the Saenuri Party is not cooperating fully in the probe.

Since last week, the Democrats have staged outdoor protests at Seoul Plaza to condemn both the Park administration and the ruling party for a lack of cooperation.

While the Democrats welcomed Hwang’s plan, the Blue House did not respond right away. After replacing her chief of staff Monday, Park made a counterproposal to have a five-way meeting.

The assembly’s probe into the NIS is scheduled to end on Aug. 15 and negotiators from the Saenuri and Democratic parties held talks about extending it to allow more witnesses to testify before lawmakers.

The two sides agreed yesterday to extend the probe by a week with a schedule to adopt the investigation outcome report on Aug. 23. They also agreed to hold hearings on Aug. 14, 19 and 21 to hear from witnesses.

They, however, failed to agree on who will testify.

The Saenuri Party is adamant about leaving Kim Moo-sung and Kwon out. Kim and Kwon worked as senior campaign managers for Park.