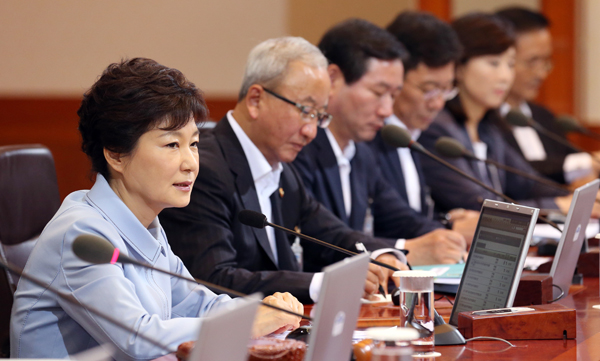 President Park Geun-hye, left, presides over a meeting with her cabinet yesterday in the Blue House as she urged ministers to reform wrongful practices from the past and dedicate themselves to a new political culture based on proper values. [Joint Press Corps]

President Park Geun-hye yesterday described the mysterious disappearance of a record of the 2007 inter-Korean summit from the National Archives as an “unprecedented event” that should have never happened.

Park made the comment at a meeting with her cabinet yesterday at the Blue House as she urged ministers to reform wrongful practices from the past and dedicate themselves to a new political culture based on proper values.

“It was an unprecedented event that an important historical record disappeared,” Park said. “It undermined the fundamentals of our country and erased history. It was something that should never have happened.”

Park was referring to the mysterious disappearance of an original transcript of the conversation between the leaders of the two Koreas during a summit in Pyongyang in 2007.

Following an accusation that President Roh Moo-hyun disavowed the western maritime border during his meeting with North Korean leader Kim Jong-il, lawmakers voted to give themselves unprecedented access to the National Archives last month to check the transcript of the summit. After several searches, they concluded that the transcript was not there.

The disappearance fueled political battles between the ruling and opposition parties and contradictory blame claims. The battle calmed down after the two sides made a political compromise to walk away from it. The ruling Saenuri Party asked prosecutors to launch a probe into the missing transcript.

Park’s remarks are expected to reignite the controversy. The Democrats already reacted sensitively.

“The DP agrees with Park’s point that the disappearance of the transcript is something that should never have happened,” Representative Kim Kwan-young, senior spokesman of the DP, said yesterday. “But we are suspicious of her motive for abruptly bringing up the issue.”

Kim asked rhetorically if Park was trying to reignite the political feud and said the Democrats are concerned that Park was suggesting guidelines for the prosecution’s investigation.

Before talking about the disappearance of the transcript, Park must make public her position more clearly about the NIS’s alleged interference in the presidential campaign last year, Kim said.

Park’s remarks came a day after her intelligence chief testified before the National Assembly that he believed Roh had renounced the Northern Limit Line at the 2007 summit.

At a closed-door session of the National Assembly’s special committee to investigate the National Intelligence Service Monday, Nam Jae-joon, director of the NIS, told lawmakers his conclusions about Roh’s remarks.

The NIS has kept a copy of the summit transcript and an audio recording of the Roh-Kim dialogue. The agency declassified the transcript in June and released it despite the Democrats’ fierce protest.

In the NIS copy of the transcript, Roh made vague and conflicting remarks about the NLL.

“Roh agreed to Kim’s remarks to get rid of the NLL, so I concluded that he had given up the NLL,” Nam was quoted as saying by Saenuri Representative Kweon Seong-dong.

Nam, however, told lawmakers that Roh did not use the word “give up” during his meeting with Kim, DP Representative Jung Chung-rae said. “We asked Nam if the transcript included the word ‘give up,’” Jung said.

“And Nam answered there is no such word.”

According to Kwon and Jung, Nam also told lawmakers that the NIS made its own decision to declassify its copy of the NLL transcript on June 24, denying speculation that he acted under the order of the Park Blue House.

Nam said he declassified the transcript to defend the honor of the NIS from the Democrats’ repeated attacks and distortions.

Following Nam’s action, the Democrats demanded he be fired and the NIS be reformed thoroughly. In July, Park ordered the NIS to come up with a self-reform plan.

At the cabinet meeting yesterday, Park made clear that she will not allow the scandal from interfering with state affairs, particularly her plan to push her economic agenda forward.

“We must not forget that politics does not exist to reign over the people but to serve the people,” Park said. “The people’s hardships still continue and politicians must concentrate their efforts to improve the people’s lives and improve the economy through dialogue and compromises.”

She said she replaced some Blue House aides Monday to seek a change and urged politicians to follow her to reform, politics-as-usual.