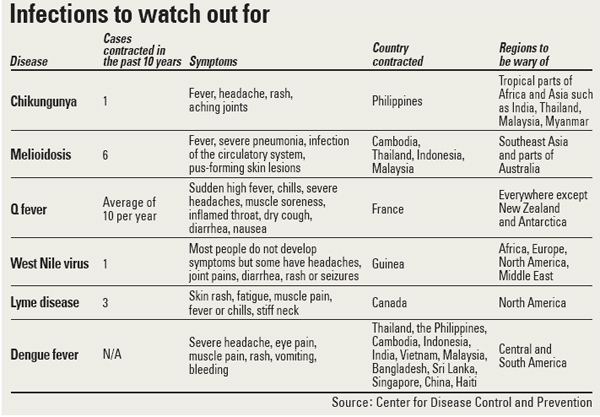 The unexpected death of a Korean actor following a movie shoot in Cambodia, where he became infected by bacterial blood poisoning, raised alarms over the dangers of contracting exotic diseases overseas, especially during the summer traveling season.

Park Yong-sik, a 67-year-old actor noted for his striking resemblance to former president Chun Doo Hwan, was the first person to die from the infectious bacterial disease septicemic melioidosis in Korea last week.

Park spent about a month in Cambodia shooting a movie in May. He suffered symptoms including fever and painful urination. After complications from the blood poisoning set in, Park died in a Seoul hospital Friday. His funeral service was held yesterday.

People who contract melioidosis may have symptoms similar to pneumonia along with joint pain and skin infections.

The Ministry of Health and Welfare and the Centers for Disease Control and Prevention issued a warning last Friday about the exotic infection.

The number of travelers who return to Korea after contracting a contagious disease not known here has increased threefold over a decade, from 104 in 2001 to 353 last year.

Melioidosis is endemic in Southeast Asia and northern Australia. Since it was legally designated as an infectious disease here in December 2010, there have been three cases of patients contracting melioidosis in Korea. But Park’s was the first fatal case since 2010.

But before 2010, there were three deaths from melioidosis here, including that of 47-year-old man who was infected during a trip to Cambodia in 2009 and a 32-year-old Thai man who migrated to Korea.

There is no vaccine for melioidosis, which can be contracted through inhalation or contact with contaminated water or soil. People who are diabetic are more vulnerable to the disease, which has a fatality rate of 40 percent.

Other dangerous contagions not indigenous to Korea include chikungunya virus, dengue fever and West Nile virus, all of which are transmitted by mosquitos.

There has been one case of mosquito-borne West Nile virus over the past decade a 58-year-old man who died last November after spending half a year in Guinea. Dengue is far more common.

Q fever, which is contracted by inhaling a spore-like cell from an infected animal, affects an average of 10 Korean patients a year, according to the Centers for Disease Control.

The infections are contracted in countries with more tropical climates than Korea such as Southeast Asia or Africa, which more people are visiting for work, volunteer service or tourism.

The Centers for Disease Control reported Monday the first case of chikungunya in Korea. A 23-year-old man was bitten by an infected mosquito in a weeklong visit to Manila in June.

Afterwards, he was hospitalized with fever, pain in the back and rashes. Chikungunya is not a fatal disease.

More common diseases caught abroad include malaria - more than 50 cases of which have been recorded each year since 2010 - or Salmonella paratyphi, which went from five cases in 2001 to 30 last year.