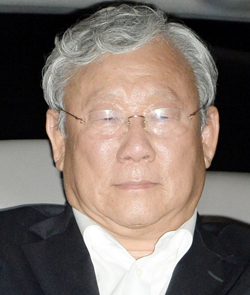 The spectacular downward spiral of one of the country’s most admired journalistic institutions, the Hankook Ilbo, reached a new low on Monday with the arrest of its chairman, Chang Jae-ku.

The Seoul Central District Court on Monday approved Chang’s detention ahead of a first trial that has yet to be scheduled. He is suspected of causing losses of about 30 billion won ($26 million) for the Hankook Ilbo and its sister paper, the Seoul Economic Daily, as well as embezzling about 13 billion won from the financial newspaper’s coffers.

As he was being led to jail, Chang, 66, was mobbed by reporters asking, “Do you admit to the allegations?” and “Say something to your Hankook Ilbo reporters.” He did not respond.

Founded in 1954, the Seoul-based Hankook Ilbo rose to fame as the first daily to advocate a moderate journalistic stance in a country polarized by the interests of the ruling and the opposition parties.

The newspaper company is currently under the protection of the court, which has appointed a bankruptcy manager.

The manager controls the firm’s assets, including a total of 9.6 billion won in back pay owed to reporters, to prevent Chang from selling off the business on his own. Chang has forfeited all rights to company assets.

Although the court is taking steps to revive the firm, it needs to negotiate its moves with creditors.

In April, a group of reporters accused Chang of embezzling money from the firm. In retaliation, some senior reporters were fired, including the editor-in-chief.

Tensions escalated in June when management blocked reporters from accessing the newspaper’s intranet and from physically entering the newsroom, but a court ordered in early July that they be let back in.

On July 24, while the chairman was under investigation by prosecutors, 201 former and current reporters and employees filed a financial workout plan for the company. On Aug. 1, the court finally appointed a bankruptcy manager and put the firm under legal protection.

In its heyday in the 1980s, the paper made several progressive moves, such as allowing the first labor union and launching the first official, transparent recruitment system. The reforms made the Hankook Ilbo one of the most popular workplaces for talented young journalists. With its tough but practical training system, particularly in covering crime and social issues, the newspaper earned a reputation for being like a journalism school for cub reporters.

Founder Chang Ki-young was a renowned politician who served as deputy prime minister during the Park Chung Hee regime. Although not a journalist, he was respected by his employees for allowing reporters to cover stories free from political pressure.

The company, which also runs the English-language Korea Times, started to decline after the death of the founder’s first son, Chang Kang-jae, in 1993. After that, debt, corruption and scandal invaded the media group as the four younger brothers, including current chairman Chang, pillaged the company along with other family members.