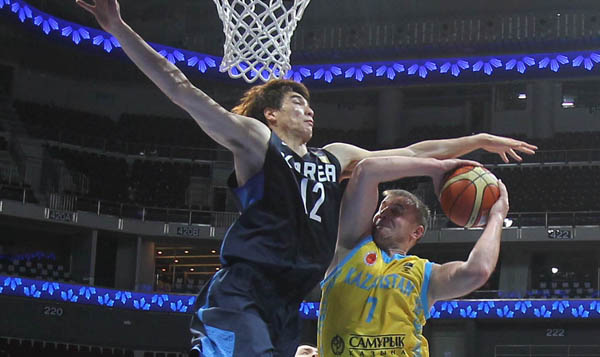 Korea’s men’s basketball team routed Kazakhstan, 71-47, early yesterday morning to secure a slot at the last eight of the FIBA Asia Championship in Manila with one more game left.

Korea picked up three wins and a loss in Group F and confirmed its runner-up finish in the group. The four best teams in the two six-team groups, Group E and Group F, will reach the quarterfinals.

Korea will play India today to wrap up the second-round group competition. It will meet a third-place team from Group E at the quarterfinals tomorrow.

Korea extended its lead in the third quarter to 57-38 and the gap widened after Jerri Jonson, a naturalized Kazakh, fouled out in the fourth quarter.

With a win over India, Korea can tie Group F leader Iran (4-0), which plays Kazakhstan today. But Iran is still the group leader because of a rule that states when two teams in the group finish with the same winning percentage, the winner of their head-to-head contest becomes the group leader. Korea lost to Iran, 76-65.

“The players became weary after playing night games for the second time in a row,” said Yoo Jae-hak, Korea’s manager. The game against Kazakhstan started at 10:30 p.m. local time, as did a previous game against Bahrain. Today’s game against India will start at the same time. “I will try to have them recharged sufficiently.”

In Group E, Taiwan is leading with four wins, while the Philippines and Qatar are trailing both with three victories and a draw. Jordan is in fourth place with two victories and three losses while Japan is in fifth place with one victory and four losses.

The top three teams at the Asia Championship get a berth to the FIBA Basketball World Cup, held in Spain next year. Korea has not advanced to the quadrennial event, formerly known as the World Championship, since the 1998 event in Greece.