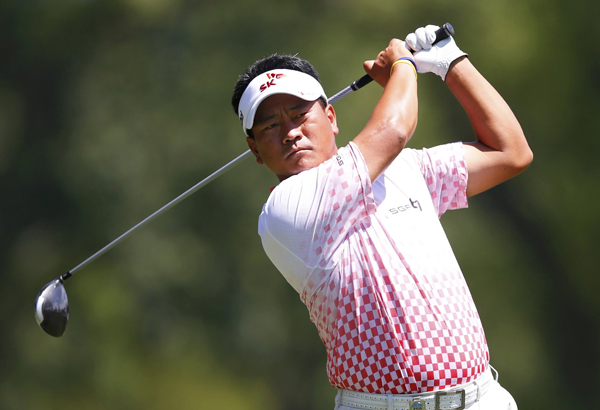 Korea’s Choi Kyoung-ju, or K.J. Choi, tees off on the ninth hole during a practice round for the 2013 PGA Championship at Oak Hill Country Club in Rochester, New York, Tuesday. [REUTERS/NEWS1]

PITTSFORD, New York - Tiger Woods is leaving nothing to chance in his last chance this year to win a major.

Fresh off a seven-shot victory at a World Golf Championship - his fifth win of the season - Woods showed up at Oak Hill late Monday afternoon and spent most of his time chipping and putting, trying to learn the nuances of the greens. Remember, his failure to adjust to the greens is what derailed him at the British Open two weeks ago.

He also spent time with Steve Stricker talking about putting, which must have been a daunting sight for the other players. The last time Stricker gave him some putting tips was in early March, and Woods went on to win three of his next four tournaments.

The stakes are higher than usual for him at the PGA Championship.

This isn’t the first time Woods has gone into final major trying to make sure his season doesn’t end without one. One difference from previous years is that Woods now is piling up wins just about everywhere except the majors.

The Bridgestone Invitational was his fifth win of the year. Only twice in the last 30 years has a player had at least that many PGA Tour wins in a season without a major - Woods in 2009 and Woods in 2003. For someone who has been stuck on 14 majors the last five years, Woods didn’t sound like he was in panic mode.

“I think winning one major championship automatically means you had a great year,” he said Tuesday after playing nine holes and spending even more time in the practice area, fine-tuning a game that already is in great shape. “Even if you miss the cut in every tournament you play, you win one [major], you’re part of history.

“This year, I think it’s been a great year so far for me, winning five times,” he said. “And you look at the quality of tournaments I’ve won - The Players and two World Golf Championships in there - that’s pretty good.”

It used to be major or bust for Woods, but when asked if he had adjusted his standards during this five-year drought, Woods offered a simple, “No.”

Still a great year without a major?

“Yeah,” Woods said, offering nothing more than a smile.

Even so, he conceded that the 15th major has been tougher to get than he would have imagined. So much has transpired since that U.S. Open playoff victory at Torrey Pines in 2008 - reconstructive surgery on his left knee that wiped out the rest of the 2008 season; revelations of multiple extramarital affairs at the end of 2009 that led to divorce and cost him millions in corporate endorsements; more injuries that forced him to skip two majors in 2011.

The very thing that irritates him about his recent record in the majors is what gives him hope - he keeps giving himself opportunities.

“I’ve had my opportunities there on the back nine on probably half of those Sundays for the last five years, where I’ve had a chance and just haven’t won it,” Woods said. “But the key is to keep giving myself chances, and eventually I’ll start getting them.”

The traditional, tree-lined East Course at Oak Hill can present the appearance of Firestone, where Woods won for the eighth time last week. The difference is the greens on the Donald Ross design, which tend to slope severely to the front. The rough is thicker than usual, not nearly as severe as Merion, but enough to get players’ attention to hit whatever club his necessary off the tee to keep it in the short grass.

Woods tied for 39th and never broke par when the PGA Championship was last held at Oak Hill in 2003, though that’s a pretty small sample to argue if this course suits him. Remember, he was finishing his first full year without a swing coach. And while he won five times that year, Woods won only one tournament over the last six months.

He is back to No. 1 in the world by a mile. He is the favorite at every major, even though he’s gone 17 majors without winning. He is the center of attention, and that only ramps up when he arrives fresh off a seven-shot win.